I Think I'll Slip On Down to the Oasis... First Sudan Game

Disclaimer: This game took place in July! My erstwhile opponent John and I have been talking for years about doing a summer game day in the backyard, accompanied by some burgers or some kind of meat cooked over open flame on a grill - you know, manly stuff. This year we finally scheduled one, and as it is wont to do in Michigan, it rained!

Never mind, we moved it into my screen room/three seasons room or whatever you want to call it. We got several games in, I just never updated them on this here blog thingy!

First up was our first go at The Men Who Would Be Kings. I've become a fan of Dan Meresey's rules, even though I have never played one! Lion Rampant, Dragon Rampant and Pikeman's Lament are all on the to-do list. In the meantime, TMWWBK did not disappoint.

We often eschew the scenarios in rulebooks, especially when taking rules for a test drive, and that was the case again here. The basic scenario involved a column of British escorting a camel baggage train to God-knows-where stopping for a rest at an oasis. Unbeknownst to our heroes, a Mahdist horde has been trailing the column, and took this opportunity to pounce.

Jon commanded the heathen rogues, while I did my best with the Queen's troops. Which wasn't great! Despite my best efforts, and some reasonably good shooting, the devils were upon us in no time, and the column was overrun. This will not look good in the London papers.

The quick result was no fault of the rules. We decided we goofed by setting the sides up too close to each other. They were already in range, and by the time they moved, there just wasn't time for my heroic men in khaki to get off more than a couple volleys before it became a numbers game in melee. The difference in troop types did come into play somewhat, with the Scots holding on longer than the Egyptians, which seemed right.

Also of note, we played it with different leader characteristics for the British, but all the same for the Mahdists. Too difficult to keep track of individual leaders with that many units that all look the same. It worked fine.

Terrain is scratch built, based on cork boards. The minis are all 15mm and are a mix of Essex, Peter Pig and Old Glory 15s. I like how this played out, and would like to add some more troop types.

I can see how this could be scaled up to a larger, multi-player game, and that's in mind for the future, too. It will just take painting a bunch more Mahdists! And there are the scenario rules provided, which I would also like to give a go sometime. Must keep the Empire intact, what? 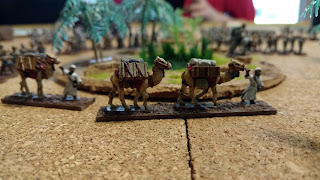 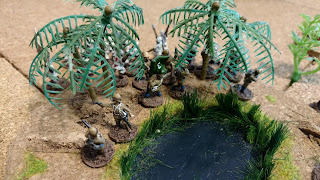