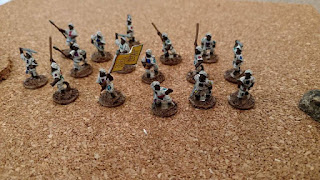 I finished up my first unit of Dervishes - based individually in a group of 16 for The Men Who Would Be Kings. These are from 19th Century Miniatures/Old Glory 15s and are very nice indeed. About five or six poses with spears and the same with swords, with some nice leader poses as well. Hardly any flash - just a few "spears" at some points, but virtually none on mold lines or anything like that. Good detail, and they are painting up nicely. I am very pleased with them. 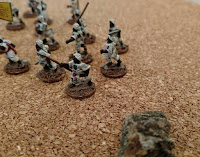 I don't know how accurate I am on colors and such, but they look good to me. They are painted with a base coat of Vallejo off white, washed with pale gray and then spotted up with "patches" using fine tip Sharpie and artist pens.

Once I get another hundred or so painted up, the mob view will probably be more impressive than any individual color element anyway.


So there. Keeping busy on the Sudan project!
Posted by Scott Mac at 10:12 AM No comments:

Email ThisBlogThis!Share to TwitterShare to FacebookShare to Pinterest
Labels: 15mm, Colonial, Men Who Would Be Kings, Old Glory 15s, Sudan 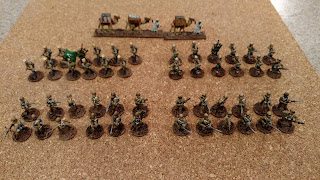 Well, there it is, enough British and Egyptians to field a solid 24 point force in The Men Who Would Be Kings. I have some more in the queue to provide some variety - some Sudanese, some additional Egyptians, some Egyptian lancers, even the 21st Lancers. No artillery yet, though.

Question: Is it a khaki line or a khaki smudge? Certainly not a thin red line at this point.

In the meantime, a sneak peak at the Dervishes. Just a few to go there! Fortunately they should not be overly complicated and hopefully go quickly. 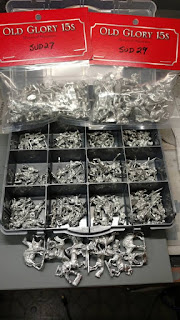 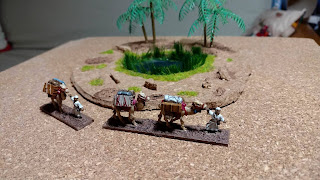 One of my more amusing painting faux pas occurred years ago when I was painting up some 15mm WWI Arab camelry. Things were going well, and all looked very nice. As I was showing them to a friend - and I wish I could remember who this occurred to first - we noticed I had painted the camels with hooves. Camels don't have hooves!

Curiously, I haven't painted a camel since, until now for the Sudan project. These three are from Peter Pig's camel baggage train, with two Egyptian handlers. Note the fine detail on the packs. Note the accurate light color for camels of the region. Note the lack of hooves. :) 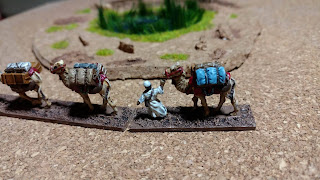 I think the Peter Pig minis are slightly smaller than the Essex I started with, but they won't be mixed together, and the difference is negligible. I like having little extras like this that provide something for one side to attack and one side to guard. Perhaps I should get some more.

Right now I have one final British unit almost done, and have started in on the Dervishes that I received from 19th Century Miniatures. Those look very nice as well. Stay tuned.
Posted by Scott Mac at 9:51 AM No comments: