I Wish I Was in the Land of Cotton...

I had originally planned on posting some photos of some Union troops today. But it being cold enough to freeze the balls of a brass monkey this morning (-23F), I really wish I was in Dixie. Anywhere warmer, actually.

So instead, here are a couple regiments from what I can only assume would be a warmer place. Tennessee? Georgia? Alabama? Yes, please.

I've also been trying to inventory the ACW collection. I'm realizing I need to put some effort into a project like this that already has a lot done. Still, I'm not 100% settled on a ruleset. I may go back and look at adapting The British Are Coming again.

Dixon figures, painted some time ago with the usual mix of Vallejo and Testors. 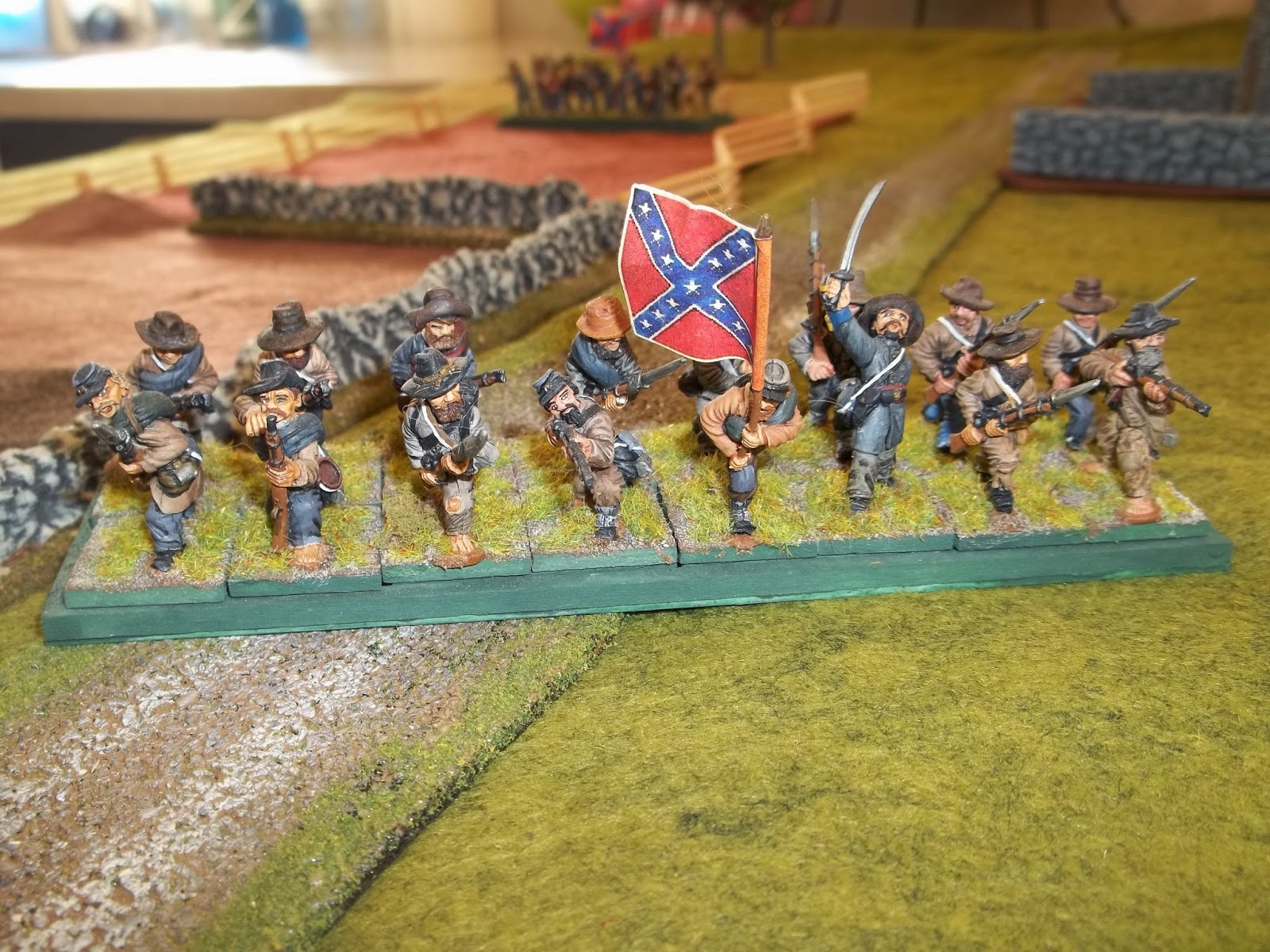 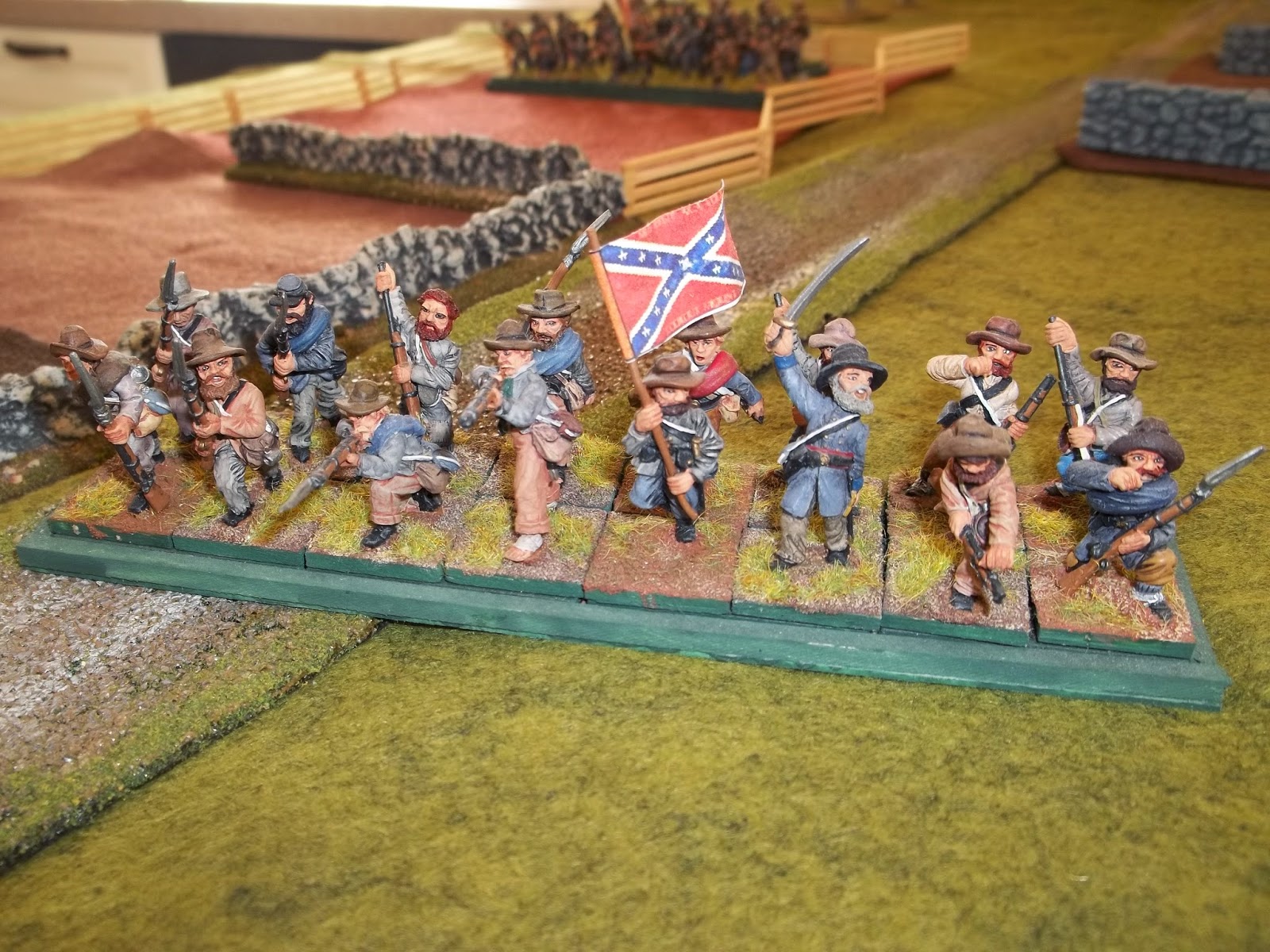 Seems like as good a day as any to post these. I won't go into the unit histories, but suffice to say no ACW collection is really complete without these guys - the 1st and 2nd Louisiana, better known to history as the Tigers.

I finished these guys up last fall, but just got around to taking some pics. The pants were a bit of a pain, and it's why I kept procrastinating! In the end, though, I think they turned out pretty well. Dixon 25mm figs, the usual Vallejo and Testors paints.

This is probably about as close as I may ever get to New Orleans, so happy mardi gras! 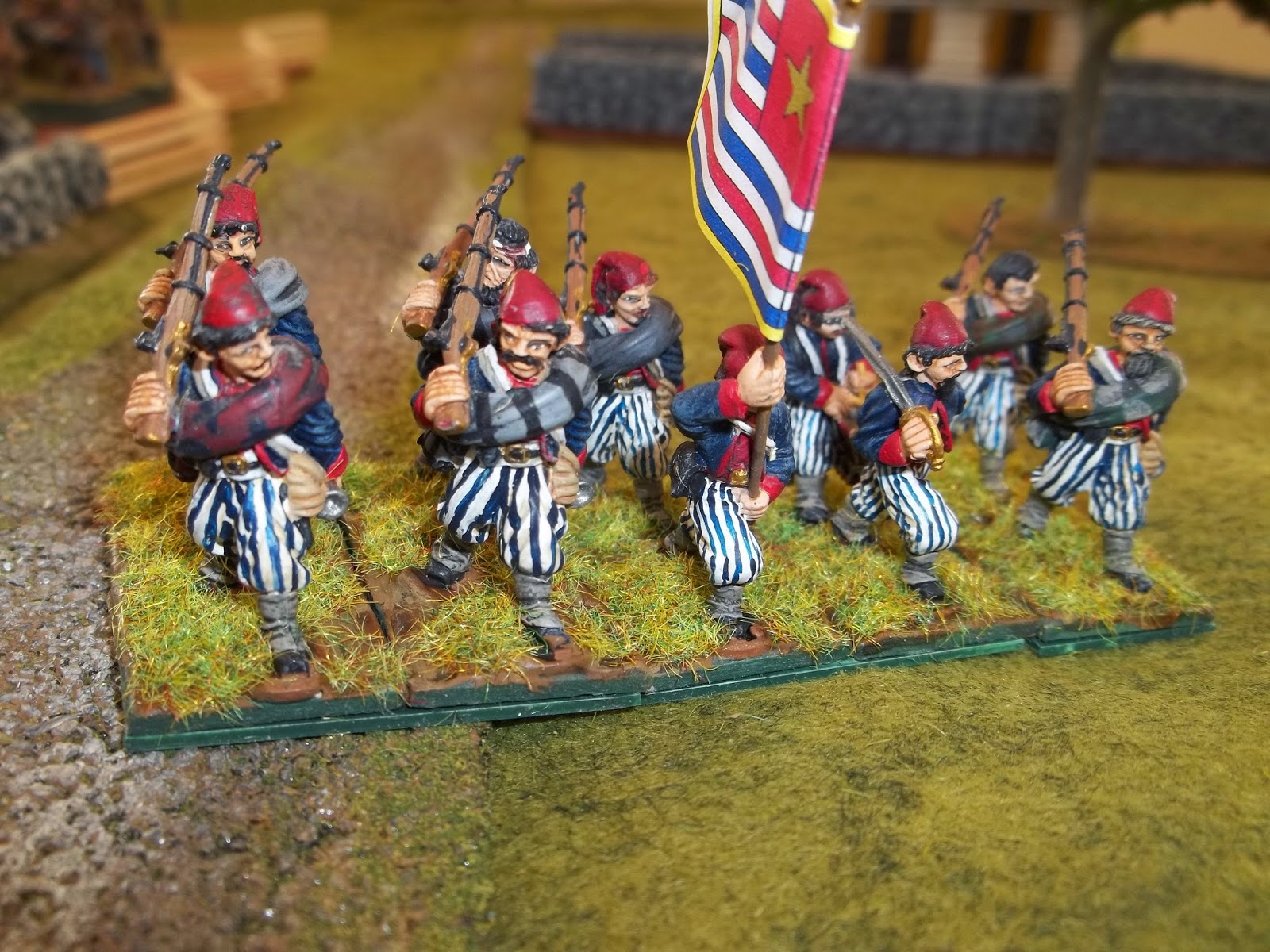 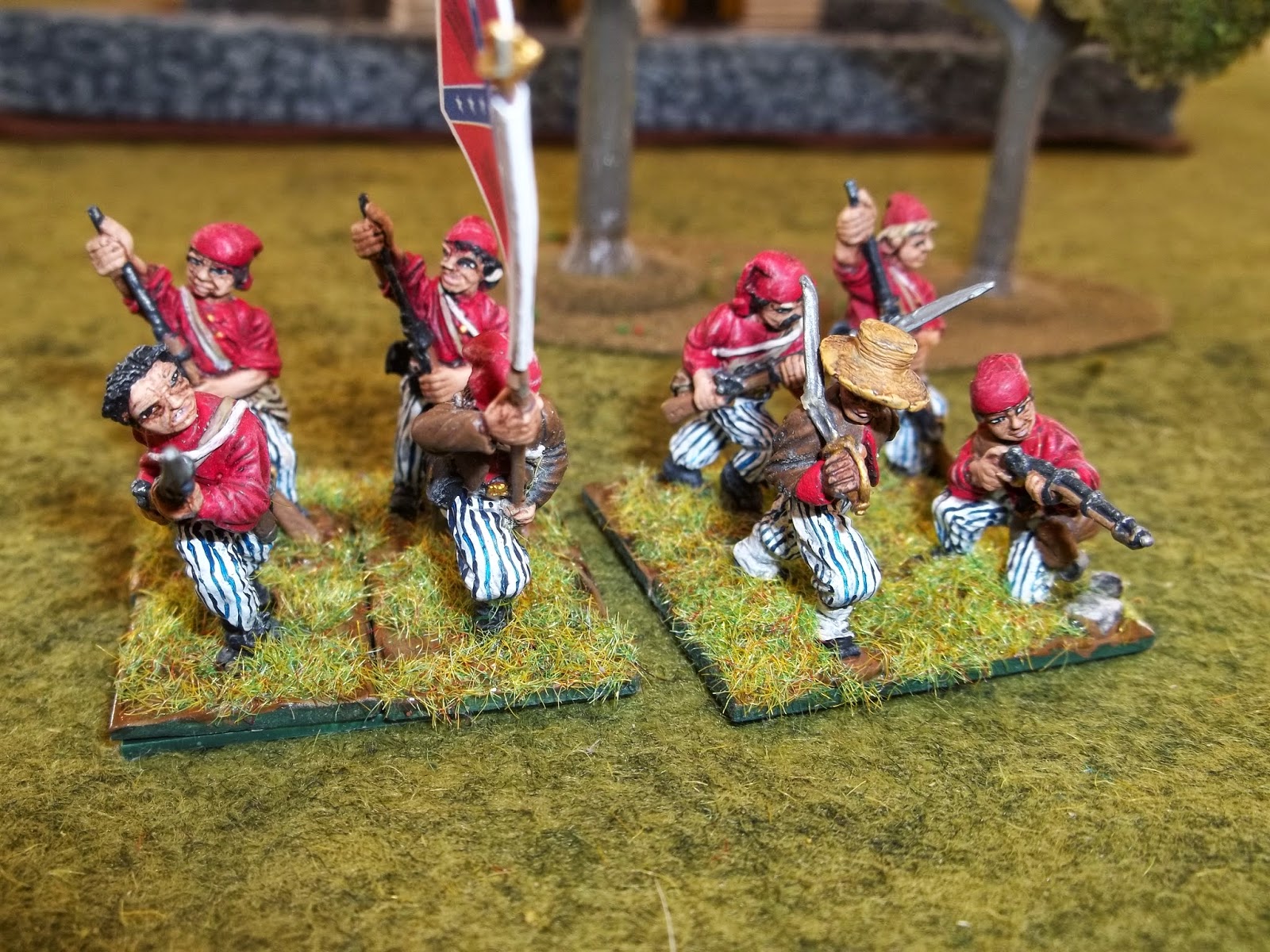 Yeah, Presidents' Day isn't one of those "cool" holidays. More of an annoyance, really, with banks, schools and government offices closed while the rest of us working stiffs march on. 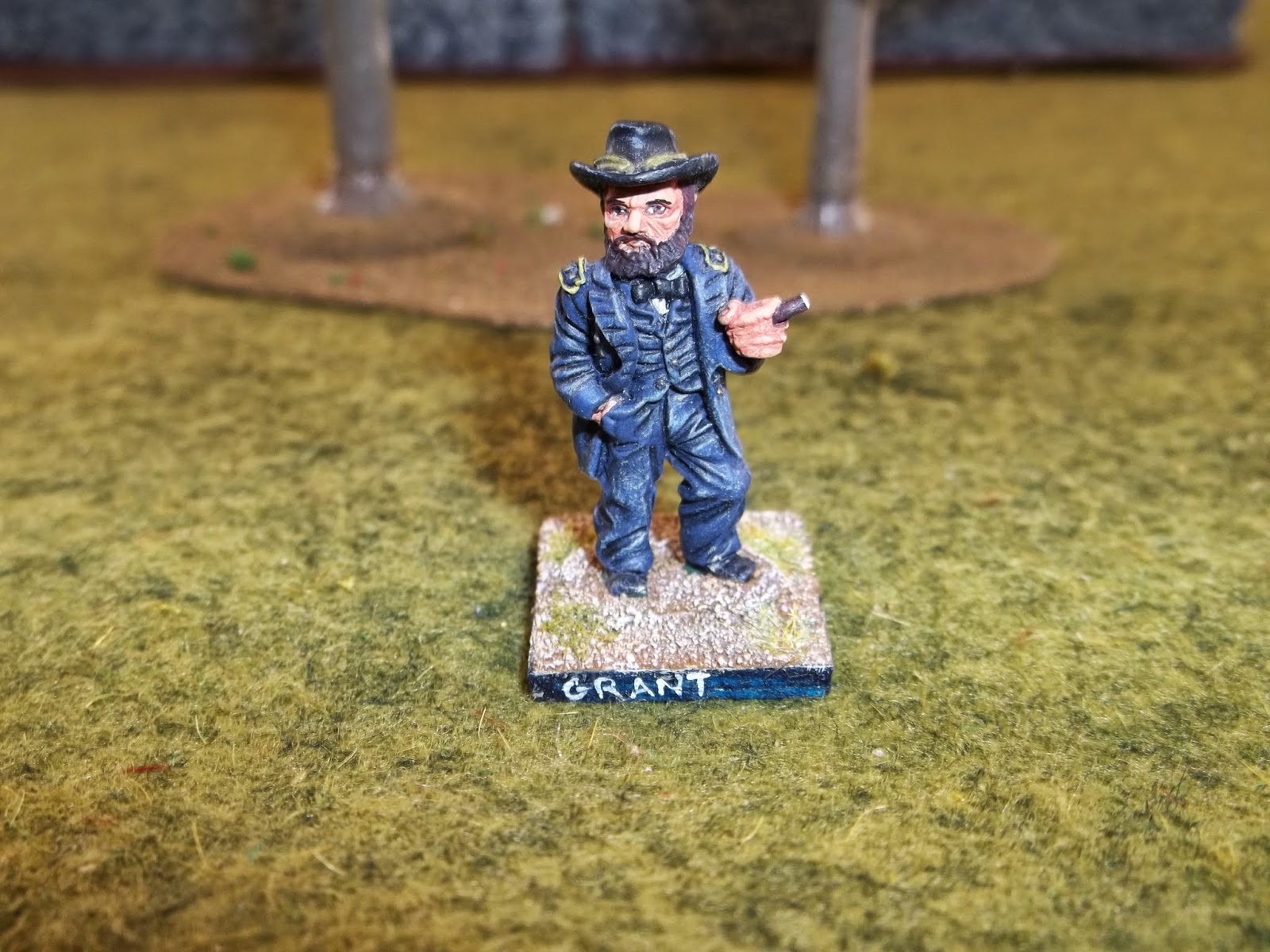 Actually one of the best descriptions I heard is it is the day the President goes outside and if he sees his shadow it means one more year of bullshit. Sounds about right!

Anyway, when looking at my ACW stuff yesterday, I realized I had a president in the mix. OK, so not the greatest president. OK, OK. One of the worst. But still. Here is U.S. Grant still in his guise of Union general. I have a George Washington mini somewhere that may have been a better choice, but this photo was immediately accessible, so here he is. Old Dixon, 25mm, the usual assortment of Vallejo and Testors paints.


More on the ACW coming soon.

Now that I've showcased the games I played in at Flintcon, a few thoughts on the con overall.

This was the inaugural event, and one I hope continues for years to come. Overall, it seemed to be a big success for all concerned. There was a good turnout with plenty of great looking games. The event was held at a church in Flint, about an hour away from me. It was easy to get to, and there was plenty of room for all the activities. And it also had a concession stand that ran all day with reasonably priced goodies, from donuts to pizza! Perfect fuel for gamers.

The con was set up on an intriguing model. An organizer explained to us that as a member of the church, he was able to obtain use of the gym at no cost, with the agreement that the church could keep all admission fees and concession profits. The result seemed to make everyone happy. He got to put on a fun event, and the church made some money relatively easily. Win-win.

One other item I thought helped make it a success was the welcoming of all different types of games. Now I am pretty much strictly a historical person, but have no issue with what others may enjoy. In particular, I thought the Star Wars and Star Trek games looked fantastic!

I really only have two minor quibbles with the whole thing, neither of which should detract in any way from the overall achievement. One is that it took place on the same day as the annual model show I like to attend. Oh, well. You can't be everywhere and do everything - and you can't arrange things based on what others are doing. Second, there were no vendors other than a flea market table. This wasn't all bad, as it curbed my spending! However, hopefully vendors pick up on this opportunity in the future. I do need to give a shout out to Rider's Hobby Shop of Flint for handing out coupons and sample copies of Wargames Illustrated.

In the end, a hearty well done to all involved!

With that, some photos. Unfortunately some were blurry and unusable, but this gives a good sampling:

Email ThisBlogThis!Share to TwitterShare to FacebookShare to Pinterest
Labels: Flintcon

Hastings. 1066 and all that. Even most non-gamers and non-history buffs have at least heard of it. Heck, even my sister knows the gist of what happened! (Perhaps more incredibly, she has been there and I have not. I must remedy that.)

So when the chance came to play in a Hastings game at Flintcon, I took it. I've always been a little wary of Hastings because it seems so, well, preordained. Not very strategic, if you will. But the sheer spectacle of it secured a position on my gaming bucket list, so there you go.

This game was run by Tod Kershner of Pig Wars fame using a new set of his rules, By the Sword Decided (to be published soon). I joined the left wing of the Saxon army upon Senlac hill, and we were given three minutes to discuss our strategy. Well, that took about 10 seconds. "Stay on the hill?" "Um, yeah, sure."

So with that, about all it took was waiting for the Normans to come to us. And come they did. Poor Harold in the center eventually decided it would be a good idea to go DOWN the hill to meet them. While not our ultimate undoing, it didn't help.

As for my small view of things, I think I went through four different leaders! Die, roll for succession, die. Repeat. One of my two units of fyrd ran pretty quickly, the other took a beating but more or less lingered around. Eventually, good old Jon, this time playing on the Normans and rolling unusually well, engaged Harold and killed him - thus earning a fee copy of the rules. Of course it didn't take much imagination to picture poor Harold with an arrow in his eye.

From there, it was pretty academic. The Normans once again carried the day, and the history of Britain was secure.

(I took more photos than this, but they were pretty fuzzy. So that's that.)

Flintcon 2015: The Case of the Misplaced Highlanders

This past Saturday I attended Flintcon. This is noteworthy for two reasons: One, it is the first time this con has been held, and two, it means I have attended two cons in the span of about a month!

I’ll have more on the con itself in a later post (spoiler alert: it appears to have been a smashing success), but for now some highlights of the first game I played.

It was a tough call between Black Powder Napoleonics, a Winter War Chain of Command and a Bolt Action game, but in the end I went with the Blackpowder game run by my erstwhile opponent Jon, and sponsored by Rider’s Hobby Shop of Flint.

And it was bad. No, not the game. The scenery was great, the minis great, the scenario designed well and the rules worked. I just rolled horribly. I had perhaps the worst turn I have ever had with dice!

To recap, this was a Peninsular battle, honestly I forget which one. The gist of it was the French were attempting to relieve a siege somewhere, and a British force was sent out to stop them. The French had cavalry, and were tasked with taking a small town from the defending British.

Being a known Scot-phile (is that a word? Maybe I just made it up?), I was given the two Highlander battalions in the center, the 42nd and the 79th. So far so good. The French approached. I fired. OK. They came closer. They charged. We locked into melee. OK. Then came “the turn.” Somehow, someway, I managed to roll so badly that both units broke and ran. Both. Leaving the center of our line basically empty. Let me say that again, both elite Highlander units broke and ran on the SAME turn!

What? I’m still not sure how, but I blame Ben. (Long story.)

That provided Jon with the opportunity to deliver the line of the day when explaining the game later, “Scott misplaced his Highlanders.” Yeah. Laugh it up, fuzzball. (Oh yeah, there were Star Wars games there too. Maybe I should have played one of those?)

So while I was reduced to spectator, somehow my two compatriots on the flank managed to seal the gap and hold, though barely. I think eventually the French would get through given more time.

And that was pretty much that. There are still a lot of things to like about Black Powder, and some things that make me scratch my head a bit. But overall it seems an interesting game.

But enough of my blabbering. On with the photos!