Historical results in wargaming are desirable, n’est pas? But are they in model rocketry?

No, I haven’t completed my Mercury Redstone model yet. But in a not-so-intentional historical recreation, two members of my flight crew had to, um, relieve themselves on the launch pad. Of course, they are both 3 years old, so perhaps they can be forgiven.

But full “flight suits” or not, Friday marked a reasonably successful launch session, the first since that highlighted in this blog earlier this spring. The weather was nearly perfect. Just a few light clouds, temps in the low 70s, and a light breeze out of the west/northwest that became calmer as the evening progressed. Here’s the details on the five launches conducted:
·      Orange plastic-fin rocket: Pretty much the perfect launch. Used an A-8-3, it flew straight and true, deployed the parachute perfectly, and drifted due east straight down the middle of the recovery field.
·      Yankee: First launch for this small rocket I built this summer. Again an A-8-3, and man, did it fly! This is the only rocket I have with streamers instead of a parachute, and deployment failed. I’m not sure if it’s because the wadding was too tight or what. The motor was missing on recovery, so perhaps that ejected itself rather than pushing the streamers out? Anyway, damage was only one broken off fin, which was recovered and reattached.
·      AstroBee: The first launch of one of my restored rockets from when I was a kid. I had to put on a new nosecone and replace a fin, but it looked good. And it launched well, too. Another A-8-3, and another near perfect launch. Good parachute ejection, and while it came down a little fast, there was no damage.
·      Flower: This is the one I built for the girls, because it has flowers on it. It’s my biggest rocket, so I used a B-4-4. Man, did it motor. This one drifted a little south of east, to the point I was afraid it would come down in the treeline. Fortunately, it fell just short, maybe 15-20 feet.
·      Payloader: Unfortunately, the last one was maybe the worst, but still OK. This was another restored rocket, having put on a new nosecone and two new fins. The launch looked good, as an A-8-3 carried it nearly straight up, but then nearly as quickly it came straight down, landing less than 50 yards away. Parachute failure again. This is a smaller tube, and it’s a tight fit. Still, damage was minimal, with just a lost fin, which I did not find. It’s simple to replace, though.

I still have two more rockets for the girls to finish (more on those later), along with the Redstone. So hopefully I get at least one more night this fall.
Posted by Scott Mac at 4:51 PM No comments:

Email ThisBlogThis!Share to TwitterShare to FacebookShare to Pinterest
Labels: rockets

Sort of Sums it Up

Apologies for the negligence in updates. The usual suspects are to blame. General summer malaise. Travel to visit the wife's family. The Olympics. And, of course, work.

What is my work, you ask? If you will forgive me a sidestep from the advertised purpose of this blog, I am a copywriter for a business to business marketing communications firm. The vast majority of my work is for a global company I'd guess many of you have heard of. They were an Olympic sponsor, after all. I've been pushing hard to get a certain automotive supplier in the fold, and some small progress is being made. Fingers crossed on that.

We also do some work for smaller clients, including an area golf course/conference center/restaurant. In this example, I am the writer of the epic prose, while a colleague orchestrated the stunning artwork and design. See it? Please note that my company was not responsible for placement. 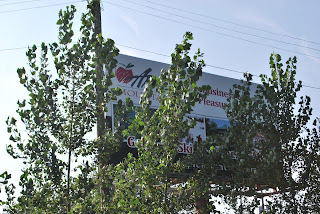 Always good to see our efforts are appreciated. (Oh, and did I mention this is on a one-way street, with traffic flowing in the opposite direction? You just can't make this stuff up. I certainly hope they got a good price from the billboard company.)
Posted by Scott Mac at 8:30 AM 1 comment: