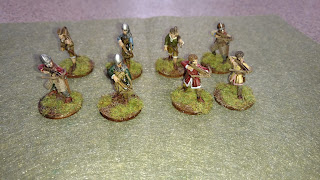 Finished these a bit ago, but just now getting around to posting it. Enough for a Saga game!

These are from Black Tree Design. Nice figures, but it does mean there are two of each pose in the unit. I can live with it. Painted with the usual mix of Vallejo and Testors. 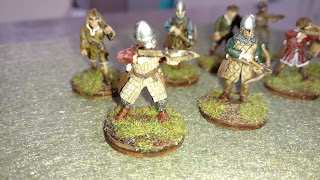 I now have a full four points of Normans for Saga, five if I add a priest. I have a few more odds and ends to paint, but what I would really like are some mounted warriors without armor, and some archers. Gotta have some archers in a Norman force.

While Saga places a great emphasis on mounted Normans given the options on the battle board, I'm not convinced it was all horses all the time back in the years after 1066. Horses are expensive, and transporting difficult. And the terrain wasn't always suitable. So I will probably do at least one or two more units of foot troops.

Need to get a game in one of these days!

Somehow, I've gotten myself on a bit of a rocket kick lately. (Squirrel!) I guess the kicker was when I took my dog for a walk one evening last week down by the field at the end of the road. It was a clear, windless evening, and the farmer had not planted his crops yet. (Corn this year, I think.) In other words, ideal rocket launching conditions!

So I dug through the stash, did some repair work on some, completed one kit that's been lying around for a year, waited for another ideal evening, and off we went.

Well, sort of. Some went off. Some went and came down hard. Some just went boom. Or fizzle. Or whatever.

First up was the little Yankee rocket to check wind conditions. That one went well on an A8-3 rocket, streamer out, nice landing, no damage. Then the troubles started.

Second one, I somehow missed that the launch lug was missing. No go.

Then the parachute troubles began. Of the following five launches, only one actually opened. Damage was a couple broken fins, and one lost one as my helpers were a little eager on retrieval and failed to fully check the rocket before removing it from the LZ. Oops. Not the first time I've had to cut a new fin. Too bad it was that rocket's maiden flight.

Then I tried the shuttle. It felt a little sticky going on the launch rod, which should have told me to abort. But no, I tried anyway, and as the engine went, it just sat there and burned a hole through the shield! It was actually kind of funny when the parachute and wadding popped out, kind of like that old NASA video.

We didn't want to end the evening like that, so I switched engines on one that had been a dud earlier. Then the igniter fizzled. This thing just didn't want to go! I should have listened... when it finally did go, the shock cord snapped! The nose came down nicely on the parachute, but the body fell to earth with all the grace of a falling sack of door knobs. Night over.

Plus the gnats were atrocious! I've never heard them so bad. Yes, heard. Sure you could see the clouds of them, but I don't know that I've ever heard such swarming noise. Weird.

Anyway, I took some notes in a logbook, which I wish I had started years ago. It's back to the repair bench, and hopefully another launch date this summer. Where, I don't know. Once the corn is in, it gets tough!

Email ThisBlogThis!Share to TwitterShare to FacebookShare to Pinterest
Labels: rockets

It's May! So I finished an Indy car! 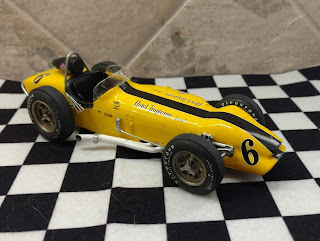 I honestly don't remember when I started working on this. Two years ago? Three? Heck, it could even be four. Darn life and other projects kept getting in the way. But since the calendar turned to May, I was determined to finish this.

So here it is: the 1963 Tropicana Special Novi as driven by Bobby Unser in the 1963 Indy 500. Well, not for long. He completed only two laps before crashing in turn 1 to finish in last place. An inauspicious debut for an eventual three-time winner, to be sure. But, dang, that's a good looking car. And it's tough to beat the roar of a Novi! 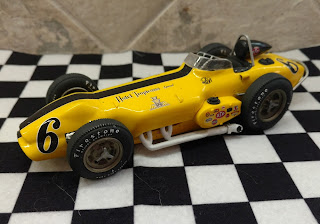 This is built from the excellent kit by Lance Sellers, with decals from Indycals. Paint is Tamiya, and went on smooth. And the decals are awesome, as usual from Michael. I don't know why it took me so long. It was a fairly straightforward build with no unusual challenges. The two worst parts were really more my fault - I lost the arm guard at some point and had to scratch build a new one, and I struggled a bit with the vac formed windscreen, but, I mean, who doesn't? Any errors are mine alone. :)

Although I am just about out of display room, I really hope to build some more Indy cars. Lord knows I have enough in the stash! Who knows, there may be a couple yellow ones on the bench right now... 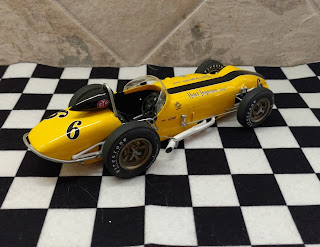 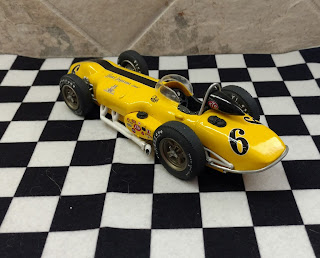