Lest we start to think that every one of my hobbies involves me sitting on my arse and lifting nothing more strenuous than a can of spray paint, let me share this recent passion with you: curling.

Yes, curling. You know, that funny sport where they throw rocks and sweep ice with a broom. Well, I'm here to say it's not as easy as it looks! Apart from the fact one simply has to maintain balance on a surface not conducive to said activity, it's quite a workout. Basically a combination of squats and lunges, with the sweeping working your arms. Never a dull moment.

It's something that really caught my attention at Vancouver Olympic Games, and something I've been wanting to try ever since. As it happens, one of just a handful of curling facilities in Michigan is located about 4 miles from my house. So I rounded up some guys from work, and we signed up for a training session last fall. That ended a couple weeks ago, and I have since been picked up by a regular Wednesday league team. It's really a lot of fun. And any activity that traditionally ends with beer consumption can't be all bad, right?

So, on a somewhat related note, my day job is as a marketing copywriter. And as it happens, one of our clients is hosting customers in a la-te-da affair in Sochi, and wanted some writeups on the various sports. I drew curling, of course! So a glimpse into the day gig is posted here for whatever it is worth:

Curling Rocks the House in Sochi


Surprisingly for a sport played on ice, it took a long time for curling to become a fixture at the Winter Games. While part of the first Games in 1924, it did not make a complete return as a medal sport until 1998. Its popularity grew rapidly at the 2010 Games in Vancouver, setting the stage for an exciting competition in Sochi.

Curling is a game of strategy, sometimes known as “chess on ice.” Teams take turns each end (think of baseball innings or bowling frames) trying to get their eight allotted 42-pounds stones of Scottish granite closest to the center of the “house,” marked on the ice by a large circular target. Sweepers generate enough friction to create a very thin film of water to help keep the stones moving as desired.

The men’s competition in Sochi is really a tossup. Norway – and its funky, colorful pants that helped bring the sport into the spotlight in Vancouver – is looking to unseat Canada, which has won three of the last four world championships but comes to Sochi with a different skip, Brad Jacobs. Sweden and skip Niklas Edin pose a significant threat for gold as well, while the Great Britain team with skip David Murdoch should also be in serious contention.

A rapidly improving Chinese team, Denmark, Russia (as host), Switzerland, Germany and the United States round out the field.

In the women’s competition, reigning world champion Great Britain, led by skip Eve Muirhead, who made her debut at age 19 in Vancouver, is a clear favorite. However, despite a new skip in Margaretha Sigfridsson, Sweden will be tough to beat as the side looks to win its third straight Olympic Gold. Other teams that could crack the top two include Canada and 2008 world champion Jennifer Jones, Switzerland and 2012 world champion Mirjam Ott, and a veteran Chinese squad led by Wang Bingyu.

The United States and South Korea teams have played well in the weeks leading up to the games and could also pose a threat. Host Russia, Denmark and Japan are also competing.

All curling competition in Sochi is held at the Ice Cube Curling Center.
Posted by Scott Mac at 11:20 AM No comments:

Curse this cold (the sneezy one, not the weather...)

Right after Christmas, right on schedule both kids came down with a bug. And in the spirit of generosity, last week they gave it to me. I muddled through the end of the work week, but by Saturday I was deemed unable to attend my favorite annual gaming convention, Spartacon in Lansing. Grrrr. Of all the rotten luck. I ended up spending a majority of the weekend trying to sleep (amidst kids and dog clamoring over me...). I'm a bit better now, but still coughing and sneezing and tired at night.

As a result, I've gotten precious little done that I intended. But that hasn't stopped me from ordering more minis! Since I missed him at Spartacon, I placed an order to Dave at I-94 yesterday for some more aircraft. My CY6 fleet continues to grow!

Among the other tantalizing temptations at the moment: Coastal warfare (PT boats and all that), Japanese samurai skirmish and, most tempting of all, 17th century Quebec with the forthcoming Donnybrook rules. Too many temptations!!!
Posted by Scott Mac at 9:54 AM No comments:

Sunk by the Bismarck

A couple weeks ago I got together with Jon for some WW2 naval action. I've had these 1/4800 C-in-C ships for years, and bust them out now and then. We went with the classic scenario: Hood and Prince of Wales vs. Bismarck and Prinz Eugen.

We went old school and used the Avalon Hill Bismarck advanced rules. These are for all intents and purposes a set of miniatures rules, though originally intended for use with the card markers in the game. I like these rules for a few reasons, not the least of which is they remind me of spreading this game out on the family room floor as a kid. They also are incredibly detailed, and really provide a study of naval combat in the period.

On the other hand, they are incredibly detailed, and play is slow! In true period style, Avalon Hill made each turn the rough equivalent of a college math exam. With a multitude of variable to calculate every turn, and then rolling dice and adding said variables in a base six (!) system, whew. No wonder computer games caught on. Then there is the whole issue of figuring out what shell was fired, how think the armor is at the point of impact, etc., etc., etc. Still, there is something refreshing about all of it, and a feeling that you are actually doing something. We could just imagine those poor souls in the fire control room, trying to calculate range and all that without computers.

At any rate, I took the British, Jon the Germans. At first I attempted to focus on the Prinz Eugen, hoping to deliver a quick knockout blow and then gang up on the Bismarck. It didn't work. He was able to close with the Bismarck and start hammering the Hood. While she didn't blow up, she took quite the pounding. In the end, the Hood started to make a run for it, the Bismarck pulled in behind, followed by the PoW and the PE. After a short running line fight, the Hood's rudder got hit, speed was halved, and it was pretty much a sitting duck with the superstructure gone, half the hull boxes gone, two turrets gone... So we called it a day. Very minimal damage to the Bismarck after all that. I really needed some plucky Swordfishes to save the day!

I have a lot more of these ships, and even picked up a few additional 3D print versions from Shapeways. I'd perhaps like to even get some of the French ships.

Perhaps, though, I should look into a different set of WW2 naval rules? A set that plays a bit faster?

The Next Generation of Painters

Yes, I have been quiet lately. A number of reasons for that, but mostly summed up in the simple word "life." Fall always seems a busy time, and then when the holidays hit, well, they are not exactly restful in these parts! 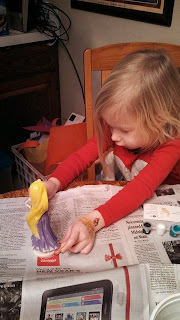 I have managed to squeeze in some hobby-related activities, though, and hope to share some of them soon. And with the upcoming con in Lansing just nine days away, it's definitely time to get back in the swing!

So what better way to start the new year than by sharing these two photos of my little girls painting their very own "minis." Such focus! Such concentration! The little girl next door brought these over one night, and they were a hit. We even had to bust out some of dad's paints for "historical accuracy." Actually, these aren't bad figures, and I'm even tempted to get one of my own...