Next on the agenda at BackyardCon II (which was held for the second year in the screen room due to inclement weather) was Chariots of Rome. This is a board game from Victory Point Games. It was actually on Kickstarter, but didn't get enough funding, but the company went ahead with it anyway and took pre-orders. Turns out it was worth the wait! 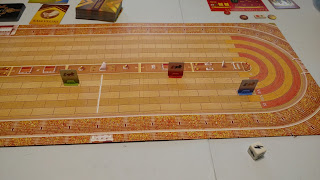 Basically each player takes control of a chariot and receives a charioteer with unique skills. Some are better drivers, some are more aggressive attackers, some are favored by the gods. You get the idea. Then by tracking your endurance, tactics and rattled level, it's off you go! There are three basic speeds to choose from (4, 7 or 10 spaces) but these can be adjusted somewhat by spending endurance to roll a die to add up to three extra spaces.

Charioteers can attack rival racers with a whip or by ramming them. Note: Whip when you are on the inside. If you make your opponent swerve, guess where they swerve! 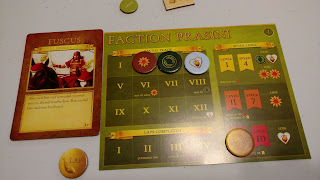 The fate deck introduces intervention from the gods and other such external devices to spice things up and keep you on your toes. Component quality is very good - nice board, sturdy cards that are clear and easy to read and tokens that make sense.

It took us a lap or so to get the hang of it, especially the cornering rules, but it's really not that difficult overall and can be picked up pretty quickly. We had only three chariots, but can see this is definitely one of those "more the merrier" type games. It would be a hoot at a party with up to eight charioteers sticking it to each other!

We're already looking at ways to make this a miniatures game, and found that Essex makes racing chariots. Ah, the temptations.

Adventures of Dr. Ford in China!

I've been wanting to play Pulp Alley for a very long time. Saturday we finally got the opportunity. We played a relatively simple smash and grab scenario to learn the rules, and it was a good one. Read on!


Dr. Isaac Ford stood with his team from the Geographic Archaeology Society (GAS) and looked across the river. There, in the valley beyond, he knew lied the next clue in his quest for the lost treasure of Emperor Zu Rong, gone missing thousands of years ago. He had made the search his life's work, at the expense of nearly everything else. 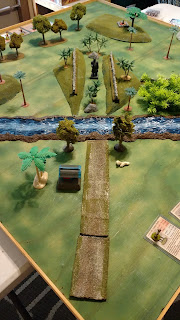 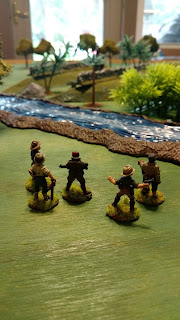 With him, though, was his daughter Mollie, who while not quite as convinced the treasure really existed, was ready to prove herself in a man's world. With a sharp tongue, Mollie is not afraid to speak her mind, but has the moxie - and the physical wherewithal - to back up what she says.

Standing slightly behind are Ernest Dunlap and Harvey Pitt, a pair of adventure-seeking Americans the Fords met on the ship to China. Ernest carries his prized automatic rifle, and scans the area looking for trouble he knows must be near. Harvey's heart is in the right place, but sometimes his good intentions outweigh his skills. He'll do almost anything to try to impress Mollie, but so far she hasn't seemed to have noticed...

Finally there is Cheng-Gong Chin, Dr. Ford's main contact in China and translator. Without him, it's hard to say where GAS would be.

As the GAS team started to move toward the river, nearby another group was also looking for clues to the treasure. Commander Hu Song, in the employ of the mysterious Dr. Wang, is also gazing across the river, and looking for GAS. Hu Song was trained by the Bolsheviks during the Chinese wars, and fancies himself a great warlord - an opinion not shared by those who know him. Hopelessly in love with Dr. Wang's beautiful daughter, he is not in the business for the money, but to impress her father, who he frankly doesn't really like, in hopes of winning her hand. It should be noted, however, that she does not share this dream. 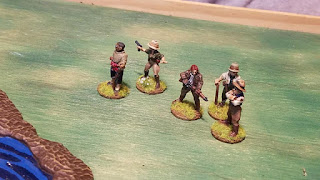 At his side is the real muscle of the operation, Bi Gui. Not as dumb as he looks, Bi Gui was toiling as a slave to another warlord when Hu Song rescued him, and he remains fiercely loyal. Behind them are the brothers Shai Dong and Wai Dong. They really are in it for the money, and any other "benefits" that may come their way from serving a high-ranking boss like Hu Song.

With them are three other thugs, Sing Lu, Bu Mao and Chang Li. Hu Song doesn't put much stock in them, but who knows? They may prove useful.

Signalling Bu Mao to checkout the roadside shrine to the right, Hu Song began to move the rest of his unit across the river. 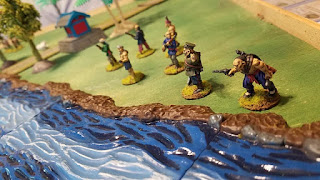 Hu Song should have known better. Bu Mao wasn't the sharpest noodle in the dumpling, or something like that. As soon as he knelt down to take a closer look, a snake shot out and caused him to jump back in fright. Hu Song heard the scream, cursed, and sent Bu Mao and Chang Li to check it out. 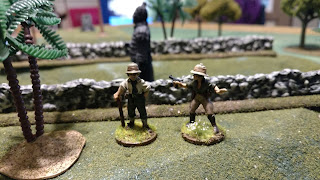 Meanwhile, after slipping and recovering in the perilous river, Hu Song looked to the right, and there was GAS crossing the river as well! 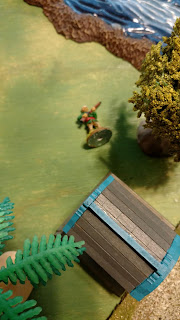 Dr. Ford and Mollie were making a beeline for the valley, with Ernest slipping to the left to provide cover with his rifle. Harvey and Chin were heading toward a clump of brush to the right.

Shots rang out, and one of the Dong brothers went down! He shook it off, and was quickly back in the fight.

While he sent Bi Gui forward to check out a mysterious stone pillar on a hill, Hu Song moved to try to intercept the Fords while the Dongs tried to deal with Ernest. 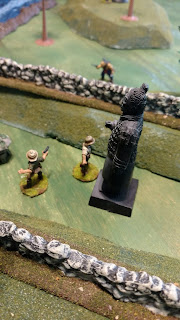 Meanwhile, the other two flunkies trying to check out the roadside shrine were both bitten by the snake. Oops! Hu Song couldn't spend time worrying about them... 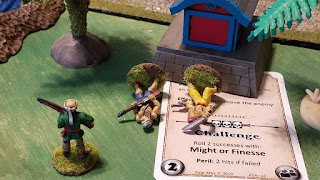 Standing in the middle of the river, Ernest got off a blast that pinned down the Dongs, allowing the Fords time to work their way through the maze of rocks and underbrush guarding the entrance to the valley. Before them stood a huge terracotta statue. This is it! Dodging bullets from Hu Song, the Fords moved up the valley to the statue. It wouldn't be easy, but Dr. Ford had spent years researching and countless hours preparing for this moment. Moving quickly, he found the release mechanism, disarmed the booby trap, and a stone glyph fell in his hands! 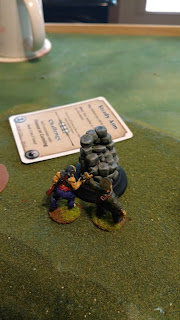 Quickly, he yelled for his daughter to follow him to the other end of the valley, hoping to get away as quickly as possible and anxious to find out what had happened to the rest of GAS.

As it happened, one of the Chinese flunkies managed to get up up, and seeing the Dongs in trouble, got off a shot on Ernest. Down he went! Now free, the Dongs also set off in pursuit of the Fords. 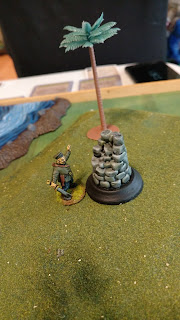 Bi Gui, meanwhile had reached the top of the hill. Though he seemed to understand what to do, anything he tried simply wasn't working. Seeing his distress, and growing in frustrating, Hu Song raced up the hill, found a mysterious gem, smiled at the thought of presenting it to Dr. Wang's daughter, and set off in pursuit of the Fords.

What about Harvey? Well, Harvey was having a heck of a time. He had stumbled upon a stone wall with some mysterious bits and pieces sticking out of the ground, but try as he might, he couldn't make heads or tails of it. He finally slipped on some loose stone, clunked his head, and got knocked out. 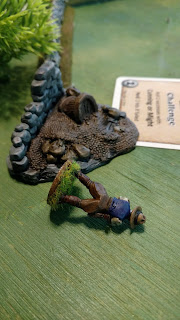 Chin has been heading toward another hill with what looked like an urn on top, when he spotted Hu Song and Bi Gui close behind the Fords. Yelling a warning, he raced off to intercept. Before he could get there, though, Hu Song calmly took a shot at Mollie, and down she went. "There's no time!" he yelled to Dr. Ford, and with tears in his eyes, Dr. Ford climbed the hill. Bi Gui was close behind, but as soon as he caught him, the earth began to tremble! Earthquake!

Fearing the worst, Bi Gui remembered his first mission to protect Hu Song and ran back to usher him to safety. Chin was able to pick up Mollie's limp body and join Dr. Ford, as they headed back toward the river. Harvey and Ernest would have to make their way out as best they could.

But he had succeeded, and he knew it. With the piece now in his pocket, Dr. Ford knew he was one step closer to unraveling the ancient mystery. Mollie would be fine after a few days of rest. 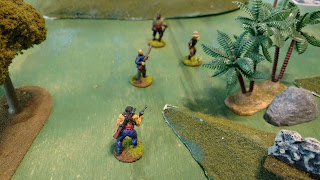 As for Hu Song, Dr. Wong would not be pleased, but what did he care? The object of his desire would certainly like the gem. And he still had the Dong brothers to help him next time. And maybe the flunkies - if they survived the earthquake.

There were probably a few things we did wrong, but really after a couple turns, we basically had it down. It proved to be a fun game, and has sparked all kinds of ideas of where we can take it. I have a couple other leagues painted up, I just need to finish the stats. And lots of ideas for more!