Make a Miniature You

Would you like that in 28 mm or 15 mm? Something else entirely?

Technology amazes me sometimes.
Posted by Scott Mac at 1:46 PM No comments:

Demise of the FLGS

My most esteemed gaming adversary, himself a hobby shop employee, sent this to me today. Ah, so, so true!

Here's a different sort of gaming for you: college football. That's American football for those of you offshore. I used to play this game quite a bit back in the day when I had a ready opponent, but hadn't done anything with it in about 10 years before digging it out on the long holiday weekend. With a few inches of new snow on the ground, it was the perfect Sunday afternoon to set it up. 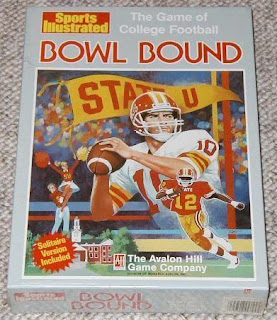 For those not familiar with the game, it's a statistics driven game matching up great college football teams from history. Basically, each player takes a team. One picks an offensive formation, the other a defensive formation, dice are rolled and results compared to see how many yards are gained (or lost). The game also takes into account penalties, turnovers, etc. Pretty cool, actually. Being statistics driven, it makes for a good solitaire game, given the right AI algorithms. There are several out there, and after some poking around, settled on one for offense and one for defense selection. It worked very well.

In game 1, I figured I would take a look ahead at what appears to be the most likely national championship game this year, and put 1966 Notre Dame against 1966 Alabama. I controlled Alabama and let the AI control Notre Dame. I lost! 17-13 in a close defensive struggle. Notre Dame returned an interception for a touchdown in the first half, while Alabama returned an interception to the ND 7 to set up its only TD for a 10-10 halftime score. After Alabama got a field goal in the fourth quarter, ND responded with a nice touchdown drive and held on over the last few minutes to win the game.

In game 2, I took 1966 Michigan State against 1997 Michigan. In a wild and exciting game, MSU pulled out a 22-21 victory. It was 3-3 in a defensive struggle early before wacky things started happening. UM got a field goal for a 6-3 lead, then tackled the Spartan in the endzone on the ensuing kickoff return for an 8-3 lead. After the free kick, another field goal made it 11-3. After yet another field goal made it 14-3, MSU fumbled the kickoff, setting up a UM touchdown. At 21-3, things looked grim. I had had some success running early, but down 21-3, I needed to pass. And that just was not going to happen on that defense. I finally got down to the 4 yard line - and came away empty. I did manage one touchdown to make it 21-10, then I switched to an option offense, and that was the ticket. Pretty much let my QB run wild, and the comeback was on. Two field goals made it 21-16, then a final clutch drive led to a touchdown with just 30 seconds to go. At that point, I went for 2 and missed, making the final 22-21 as UM could not come up with a Hail Mary at the end.

Overall, playing solitaire was kind of fun. I've tried computer/video games from time to time, but they just don't get it for me like board/miniature games. I'd definitely play this one again. I also have a Statis Pro Baseball game in the stash that I used to play solitaire all the time.

As for other solitaire projects, I'm looking at Wooden Ships & Iron Men to use with 1/1200 Napoleonic ships. Really that was one reason for playing Bowl Bound, to see how I liked solitaire again. I have HMS Guerriere almost done, and am making good progress on a USS Constitution. Hopefully that gets set up soon.

As for other board games, I also have Carrier in the stash, which I look at now and then and determine to be too daunting. I've also considered purchasing Tokyo Express.

The wife didn't say too much, but I think she thinks it's a little strange. But with no opponent readily available, what else are you gonna do?
Posted by Scott Mac at 9:16 AM No comments:

Of "Play With Ships" and Thanksgiving

If you will all indulge me a moment on this Thanksgiving Eve with a moment from my morning...

I was trying to sneak in a few minutes at the bench this morning before work and before the twins woke up. I had just started working on my 1/1200 USS Constitution when I heard the pitter patter of feet, and down the stairs came Kate. I put down my brush and she crawled up on my lap and looked at what I was doing.

"Are you making a play with ship?" she asked.

"Well, it's for daddy to play with. You shouldn't play with these."

"Will you make us a ship we can play with?"

Now how can I resist that? Now my quest begins to find a ship they can "play with."

So I'll just say as we enter this Thanksgiving weekend, I am very thankful for my family and especially my wonderful two little girls.

Happy Thanksgiving to you all, whether here stateside or wherever you are!

HMS Trafalgar - Many Shades of Gray 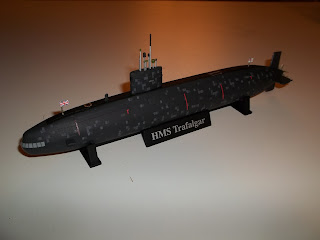 A while back I decided I needed to do an "easy" model, one to get back in the swing of things. A quick weekend project type of deal. What could possibly be easier than a submarine, right? Two basic hull pieces, a tower, a prop and that's about it. Right?

Well, that weekend project extended into many nights of masking and airbrushing as I decided to give it as good a paint job as possible.

First, the basics. This is the Airfix 1/350 kit of the HMS Trafalgar class sub. One can build any of the subs in the class with this kit, but I went with the namesake. 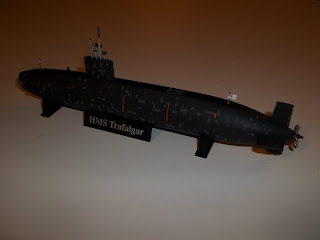 Asssembly was pretty much a piece of cake. Like many modelers, I've built my share of Airfix kits over the years, but I have to say this is the best yet. From the box, to the decals to the fit of the pieces, this is an excellent kit. I can't speak necessarily to accuracy since I'm by no means an expert on modern subs in general or Royal Navy subs specifically, but it looks good to my eye. The only extra work really was filling the seam between the two hull halves, really not a big deal. 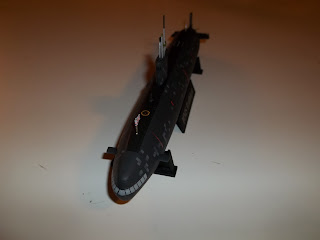 In studying photos, it became clear a distinguishing feature is the anechoic tiles, and those that have been dislodged, revealing a mosaic pattern on the hull and tower.

Decals went on very well, then a coat of Dullcote blended everything together. 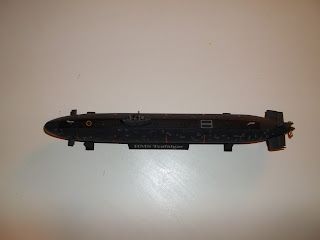 Not exactly the weekend project I intended, and it's been several weeks in the works, but I'm very pleased with the results.

If I do another sub, though, it might be straight black!
Posted by Scott Mac at 8:51 PM 4 comments:

Email ThisBlogThis!Share to TwitterShare to FacebookShare to Pinterest
Labels: 1/350, Airfix

I haven't posted on the Mustang project in a while. Mostly because I've been doing next to nothing on it myself. But body work continues at a good pace, and the guy doing the work sent these photos this week.

As you can see, he has the driver quarter panel pretty much set. We have determined the car was hit in that area at some point in the past, so there was some extra work that had to be done there. I'm not surprised, when my brother in law and I pulled the axle on that side, it was bent. So the body guy has put in a new wheel well too, and is patching up some other rust spots as he goes on both sides and in the tail light area. 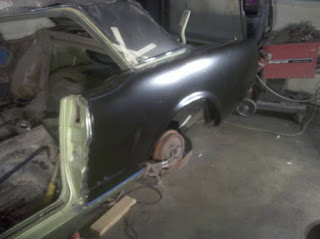 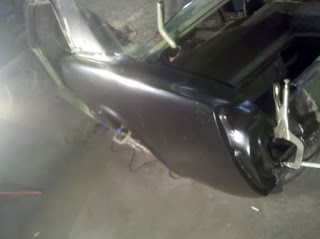 I say again, body work to me is an art form, and a talent I wish I had!
Posted by Scott Mac at 9:29 AM No comments:

Indy and the Great War

Most of us Indy 500 fans are familiar with Eddie Rickenbacker and his exploits as a fighter pilot in WWI. But I'm always interested in hearing about other connections, such as this gem found in another gamer's blog.

Fascinating stuff!
Posted by Scott Mac at 10:46 AM 1 comment:

Getting Back to the Bench

Not gonna lie, fall was a little rougher than I thought. And not just in terms of a startling lack of hobby time.

I don't often get sick, but it seems like I've been fighting one darn thing or another since the beginning of October. There's been the usual sore throats, coughs and sniffles, of course. But I also had a routine doctor visit in there that resulted in a tetanus shot update that pretty much made my left arm useless for several days, and a flu shot that may or may not have contributed to me missing two days of work the following week.

Throw in the usual zaniness of family activities, my wife having obligations for several nights along in there while I watched the kids, getting the house and yard cleared up for winter, and I haven't gotten much done at the bench. I think I've also mentioned I have lost my morning "me time" as well, since I now get the kids up and ready to go. I'm just not quite ready to drag myself out of bed any earlier to get that back. Less sleep = more sick!

Last night, though, I finally got to sit down for a brief period and work on that HMS Trafalgar model a bit. My wife signed the girls up for a weekly gymnastics class, and she took them so I could stay home for a bit. It was only a bit more than an hour, and I also did some bill paying and internet wandering in there, but it was a rare nice thing to put on some music and sit at my workbench again. Hopefully I can get back to doing that more often - at least every Wednesday for a while.
Posted by Scott Mac at 8:36 AM 1 comment: