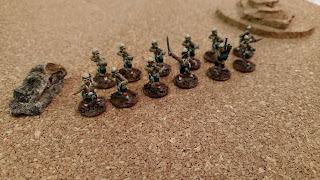 I've been enjoying painting up these old Essex 15mm figures more than I expected - even the Highlanders! Now don't get me wrong, I love Highlanders. After all, that's where the family tree has its deepest roots. I've always wanted to do a William Wallace/Robert Bruce army, or even a Jacobite one for the '45. But the plaid! 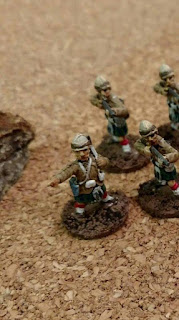 These guys definitely took longer than the other British unit and the Egyptians completed so far. But in the end I think they turned out nice. I went with a sort of Gordon/Black Watch "representative" tartan - basically Imperial Blue with Leaf Green stripes (Vallejo colors). Then you have sporrans and socks on these guys that you don't have to worry about on others. It strained my poor old eyes at times, but I suspect they will probably be one of my favorite units. Or is that favourite?

I have enough command figures leftover I could do one more unit, if I get brave enough to buy enough soldiers to fill it out! We'll see. Camerons, anyone? 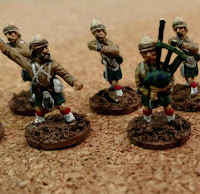 So that's three units done, which if I upgraded them enough in TMWWBK would probably get me to 24 points. But I also have one more British unit on the bench, which I may or may not finish yet today while waiting for the Dervishes to arrive. That would get me to 24 for sure, then I could start in on some alternate units that would allow me to mix up my forces. Camel Corps, perhaps? Lancers? Sudanese? Seems the possibilities are endless! 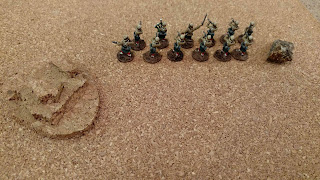 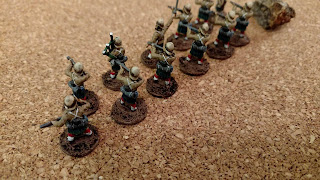 I Think I'll Slip On Down to the Oasis 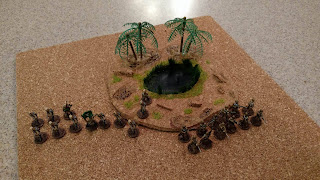 I had an additional moment of Zen yesterday while plugging away on the Sudan project. One needs very few trees for terrain!

I've never quite got the "look" of American forests down for AWI or ACW, or for that matter even European woods for Saga and such. So many trees! And let's not even start on Central American or African or Southeast Asian terrain needs.

So this came as something of a revelation, and provided enough incentive to begin some terrain. I suppose an oasis would be an important feature for all sides, so let's start there. This was remarkably simple - and inexpensive. The only thing purchased new was the cork, and that came half off at an office supply store that is closing. 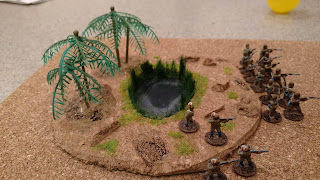 I cut the tile to shape, cut a hole in the middle and glued a thin piece of styrene sheet on the bottom for the water. I painted mine Testors Dark Sea Blue. Perhaps it should be a bit "muddier," but it looks good to my eye. Some chopped up bits of cork and some pumice gel represent some bits of rock and sand. The grass I had on hand and glued down with super glue and PVC glue. The palm trees came from a set I picked up at a dollar store a while back that had not found a home yet.

There, ready to be placed on a caravan route perhaps? Maybe one scouted out by some Dervishes for an ambush?

Speaking of which, I received a shipping notice that the Dervishes are on their way. Gentlemen, start your paint brushes! 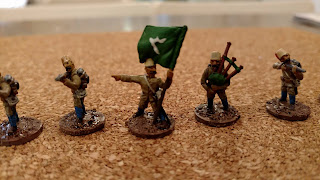 My second unit of colonials is complete - an Egyptian unit in later Sudan war kit. These are also 15mm from Essex, and are very nice and painted up well. I painted the flag in the colors of the 3rd Egyptian for no particular reason. I suppose a unit this small could have been provided a company flag, but this is prettier. 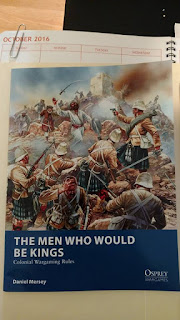 The Sudan project is proceeding well. I now have the Sudan Osprey book, as well as the Omdurman Campaign book. In addition, upon the suggestion of a poster at TMP, I downloaded Slatin's Fire and Sword in the Sudan on my iPad. Should make for some interesting reading. 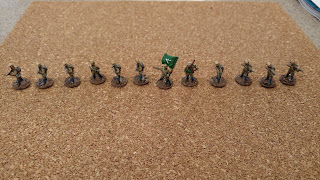 As perhaps mentioned, I am initially looking at The Men Who Would Be Kings for the rules. Those also arrived yesterday, and so far they are looking good. I've seen some mixed reviews out there - some really seem to like it a lot, some feel it falls a bit short in certain areas. For what I am trying to do, with limited knowledge, they should do the trick. Eventually I may also get the venerable Sword and the Flame rules. 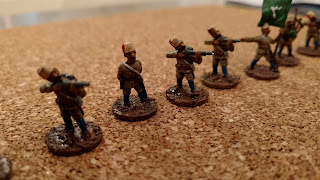 In the meantime, fear not, Dervishes are on the way from 19th Century Miniatures! And I also ordered a few more Essex and a smattering of Peter Pig to fill out some holes, create some "scenario fodder," etc. And, of course, some terrain has been started, with ideas on making some more. All in due course!

Dipping the Toe in Colonial Waters 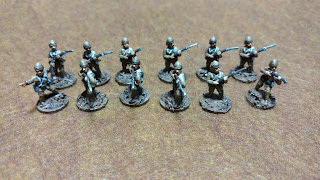 Inspiration can come from many directions. Usually it's a book, or a movie. Or just seeing some nice new line of minis. Or it can come from the attic in the garage, where I found these old Essex 15mm Sudan minis.

I have no recollection of buying them, or what I might have bought them for. But I do seem to remember trying to sell them on ebay a while ago, without success. I uncovered them again last week while looking for something else, and decided what the heck, I should paint some up. 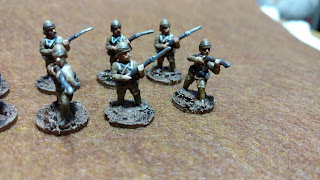 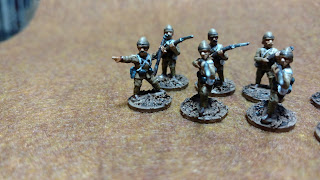 I'm not 100% sure I got all the colors right, but I think they look decent. I based them up separately - and in a group of 12 - because I have a notion I might try The Men Who Would Be Kings with them. I don't have a lot more of the British, but enough for a start. And no enemies, fuzzy wuzzies or whatnot. I'll probably create some kind of magnetic tray or something at some point - they are mounted on 1/2 inch washers.

Basically, I know precious little about the period. I've heard of Gordon (who hasn't?) and know the bare basics of Khartoum, and Mahdists, Fuzzy Wuzzies, Omdurman, etc. Looks like some Osprey purchases might be in order. 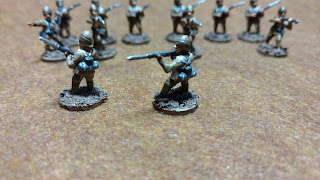 At the moment I'm thinking of getting some more Essex to add to the British for consistency, but might go with Old Glory 15s for "targets." These Essex figs did paint up rather easily. I know there are a lot of very nice looking 28s out there, and a skirmish game like TMWWBK might look better at that scale, but with 15s already started, there you go. Of course for terrain I also have nothing.

Because another period and more figs is just what I need, right?
Posted by Scott Mac at 4:22 PM 1 comment:

Start of a Qi Army 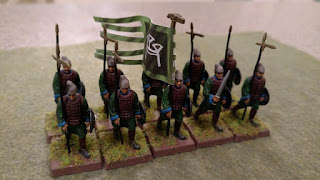 A while back I posted about backing a Kickstarter from Watchful I Studios for some ancient Chinese from the Warring States period. It's really something I know very little about, but having seen an exhibit on the Terracotta Warriors, and with my daughters' interest in all things Chinese, I jumped in. My Kickstarter experiences have been hit or miss, but I am pleased to say this one is a big hit!

While I settled on a Qi army early on (that's one of the seven warring states - I should probably do a post on that one of these days) for no particular reason, it took me a while to settle on a color scheme. Info from the period is a bit sketchy, and I saw different color combinations mentioned in different sources. In the end, I decided no one could tell me I'm wrong (a refreshing change from my norm), so I went with a primary color of green, with blue accents. I think it looks pretty good! 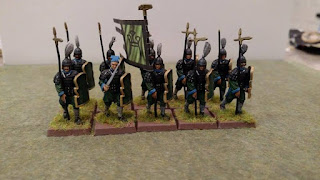 The figures are 28mm metal, well cast. They come in multi pieces, allowing some combination of heads and armament. Overall, though, they are pretty much all in the same marching pose. The designer says he is impressed by the sight of huge multitudes marching, as apparently seen in movies. I'd prefer some more "action" poses, but nonetheless these are painting up nicely and I'm sure would look good en masse. 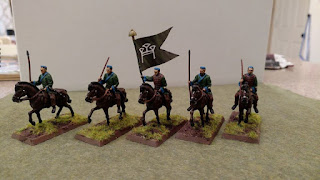 The goal here is to use these with Lion Rampant, or "Fu Dog Rampant" as the variation I have been working on is tentatively called. (Dragon Rampant being already taken!) One key difference is unit size. Lion Rampant is based on units of six or 12. Watchful I provides figures in packs of five, which historical units of the period are based on, and is considered a lucky number in China. Right now I'm thinking of just fielding units in groups of five or 10, and allowing them to shrug off the first and second hits, respectively. Obviously some testing is required. Watchful I says its goal is to create a set of rules, with units based on units of five. So five it shall be.

So far I have a unit of heavy infantry, one of light infantry and a light cavalry unit done, with some archers and another light infantry on the bench. And more to assemble and paint! Paint is the usual mix of Vallejo and Testors, with Citadel ink washes, which I really like. Banners are also from Watchful I. 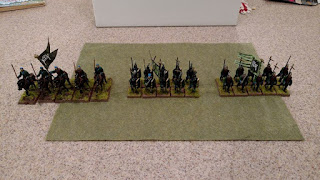 Watchful I also has a great lineup of items with a more fantasy bent, including Terracotta Warriors come to life, and other undead. I picked up a set of the Fu Dogs that have come to life. There was also mention in the Kickstarter of a Dragon. Dragon Rampant might come into play yet!
Posted by Scott Mac at 10:57 AM 2 comments: