I was very saddened to hear this morning of the loss of the HMS Bounty (replica) off the coast of North Carolina, with two crewmen still missing at the time of this posting. 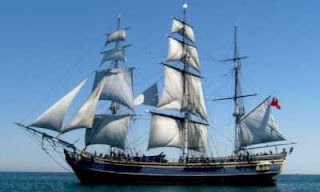 I have visited the Bounty on at least two occasions, once at the pier in St. Petersburg, FL, and once during a tall ships celebration in Bay City, MI, near my home. I've built at least two models of it, neither very good, and read multiple books on Fletcher Christian and the gang.

Here's hoping this story has a happy ending.

Probably the most famous movie opening line ever? Certainly if you don't know what I'm talking about after the first four words, you've probably been living under a rock for the past 35 years. (Crap, where did that 35 years go, anyway?) 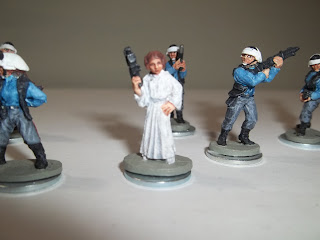 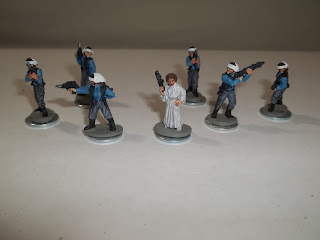 Yes, like many, I am a Star Wars fan. Not hard-core-dress-as-a-stormtrooper, but I still like the movies and have fond memories of playing with all sorts of fun toys as a kid. Over the years, I've picked up a few sets of the old West End Games Grenadier minis. I don't know that they will ever be gamed, but they are fun to paint. 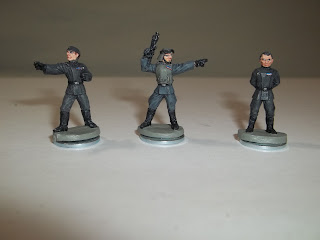 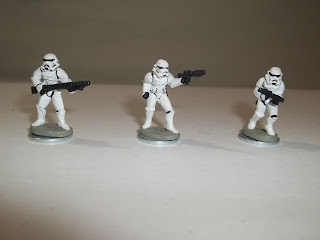 So while the main focus remains historicals, I think Star Wars qualifies, don't you?
Posted by Scott Mac at 9:54 AM 2 comments:

It's Still About Gaming, Right? Some CY6 Japanese Bombers

The initial purpose of this blog was to chronicle my hobby exploits in general, but I believe it was understood that the focus should be on miniature wargaming activities. Alas, there have been too few posts to that effect of late, so here is an effort to get back on track. 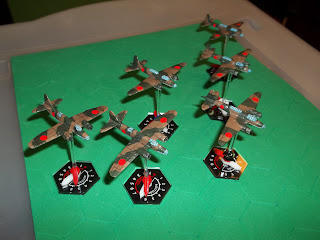 How about some Japanese twin-engine targets, er, I mean bombers, for CY6? The sharp-eyed will note there are two different types included in this initial half dozen. And you would be correct. I picked these up at a con in January, and pulled what I thought were six Sallys out of the bin marked, quite obviously, Sallys. Only when I got home did I notice the discrepancy, and found I had two Helens as well. Oh well, not really that significant in the grand scheme of things. I have six Bettys also awaiting paint (they might get the solid green treatment rather than the camo scheme shown here), and in the end they will probably all see duty as "Japanese twin-engine bombers." I'm fussier when it comes to getting the fighter-types accurately represented for the game. Does one really need 12 Sallys AND 12 Bettys, especially when gaming on a budget? Now I won't say a B-24 will do for a B-17, given engine count and all, but I can live with this. 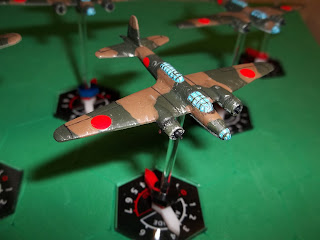 Scotia models, painted with the usual mix of acrylics. In this case IIRC, it was IJA light grey, with IJA green and Chestnut brown. Most of my aircraft have been fairly clean, but I dirtied these up a bit. I drybrushed some aluminum paint to represent the chipping that is commonly seen in photos, and used a technical pen to go over panel lines, followed by a light black wash. 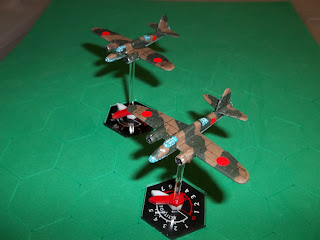 How, exactly, does one "test" kamikazes?

I was doing some research on Japanese aircraft carriers (don't ask why), and came upon a site with brief descriptions on all the various assorted classes. (There were more than I thought.) Anyway, I was given pause over this passage and photo (never mind the Akagi label, it should be Aso):

The design of this class closely followed that of the Hiryu class, but with the bridge on the starboard side. The keels were laid down for this class of ships in 1942-43, but only three of them ever reached completion. Work stopped on the Kasagi in April, 1945 when she was 84% complete, no armament having been fitted. Work also stopped on the Iso and the Ikoma in January, 1945 due to lack of building materials. They only had been completed to hanger deck level (60% complete with no hanger or armament fitted). All ships had been launched and left in their incomplete state until August, 1945 when they were surrendered and then later scrapped. The hull of the Aso had been used as a Kamikaze test-bed and she was in a poor state of repair, half sunk in shallow water when surrendered. The Unyru was sunk by the USS Redfish in the East China Sea in December, 1944.

Am I reading "test-bed" wrong? Did they test their kamikazes? Um, how did that work out?

Full site can be found here.