Finally, A Foe for the Royal Navy

After being listed as a dead in the water project on this blog a while back, I resurrected the 1/4800 scale WW2 naval project with (drum roll), some Germans!

﻿﻿OK, and some more British, too. I ordered three additional sets of the 1/4800 minis from C-in-C. I had always liked the ones I had, I just never got around to ordering more. So now at long last, the Hood has the Prince of Wales, and it has someone to fight.

So, of course, the first thing to paint up was the Bismarck and Prinz Eugen, followed shortly thereafter by a refight (sort of) of the Battle of Denmark Strait.

﻿ I used the venerable Avalon Hill Bismarck rules, and set it up on my coffee table for a solitaire session. Both sides opened at long range, with nothing but misses. As the ranges closed, some bad rolls still resulted in misses. So far, not terribly exciting. Finally, though, Bismarck got the range on Prince of Wales, and started to pummel away, with one turret taken out and several hull boxes.

Then fate intervened, and Hurricane Kate struck! That's her, the other twin, playing with mom's iPad. Until she got bored with that, and decided to move dad's boats around. With that, game over. I'd call it a minor German victory. The British were not able to score any hits of any significance, and it didn't look like they were going to. Still, I'd like to play it again.

﻿ I've been painting up some of the other ships, including things like Graf Spee, Ajax, etc., so I'd like to do a Battle of the River Plate. I've also noticed Shapeways offers additional ships in this scale, even Americans and Japanese, so perhaps I will try some Pacific surface actions. I'd kind of like to stick with the Avalon Hill rules, cumbersome though they may be, just because that's what I'm used to and they do give interesting results. I don't think I would try them with more than four ships on a side, though, unless I had plenty of other players who knew the rules.

In the interim, I am open to suggestions on other rules suitable for this, if you have any!
Posted by Scott Mac at 11:37 AM 1 comment:

Putting Painting Skills to the Test

It's a Christmas miracle! An Up the Creek post for the first time in a month!

Yeah, sorry about that. No excuses. Believe it or not, there have been hobby related activities taking place, including an actual test game of WW2 naval, and progress on the Napoleonic naval front. 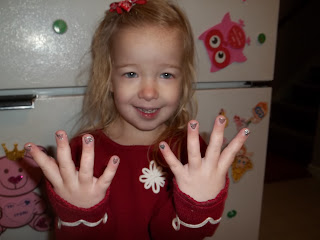 But for today, Christmas Day, I'd like to share a photo from some "painting" I did yesterday in preparation for a visit to my parents' home for Christmas Eve. That's Miss Claire (Miss Kate insisted, no photos, please), showing off dad's newfound finger nail painting skills. Yes, I painted my daughters' finger nails. Now that's a first for me. But they asked, mom was busy, and I figured, "Heck, I paint eyeballs on figures no more than inch tall, how tough can it be?"

Thankfully they were very patient, held their hands very still, and we completed the task without mishap. And all was well. Now, back to the bench!

Anyway, I hope all out there have enjoyed a great holiday, whether restful or not. I'm back to work tomorrow, off Thursday, work Friday, then another four-day weekend. I'm looking forward to that!
Posted by Scott Mac at 2:39 PM No comments: