Last weekend I made a feeble attempt to organize all my stuff. There really is no better word for it than stuff. I made some progress, though probably not as much as my wife would like. Or me, really. 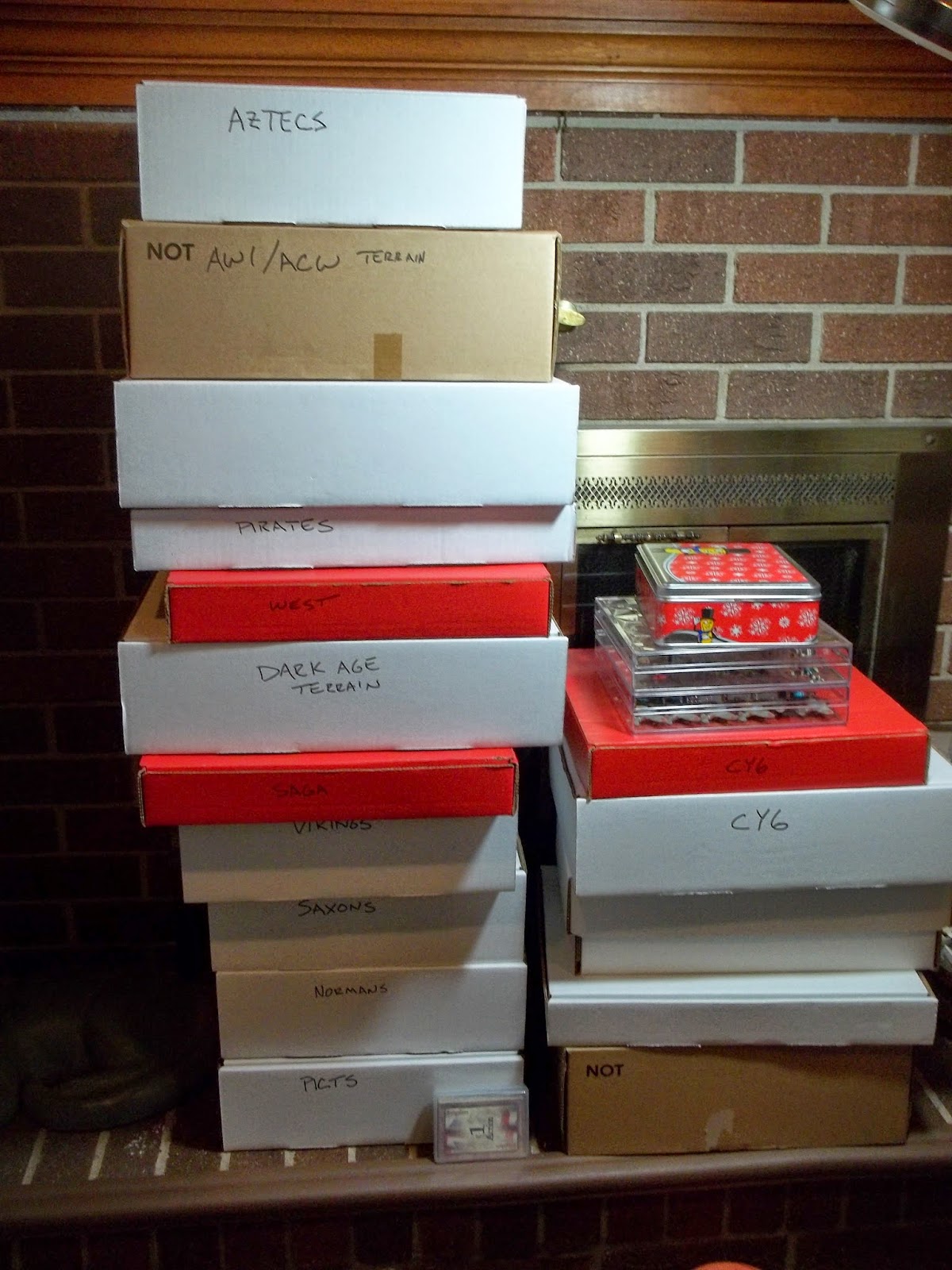 Here are some of the boxes that were piled up and at least gone through and the proper bits put in the proper places. This is just the gaming stuff. I fear to show you the modelling stuff. Especially all of the unbuilt Indy car kits. That is just plain scary.

If nothing else, this shows an utter lack of focus. Not uncommon among gamers, for sure. But with so many scattered eras, it's little wonder I never get a game in. Fortunately I have been able to focus on some terrain this year, and certain game sets are well on their way to "legitimate" gaming. CY6, for one, which requires virtually no scenery! And I have the Dark Ages for Saga well in hand for a good game, and am getting close to some more WWII skirmish. AWI and ACW terrain is looking better, too. Some goals there are to finish fences, rivers, roads, etc. Then the Wild West stuff too. Everything else should probably be considered window dressing at this point, but you know that won't last!

In the meantime, the labels show a few of my random approaches to gaming. Some, like the Union, ACW and Confederate, are pretty much full of painted figs. Others, like Aztecs, are fairly minimal, with more unpainted than painted contained therein. At this rate, I will never die, right?

And this doesn't even include my AWI Americans or my 15mm WWI collection, both of which pretty much fill up a banker's box on their own! 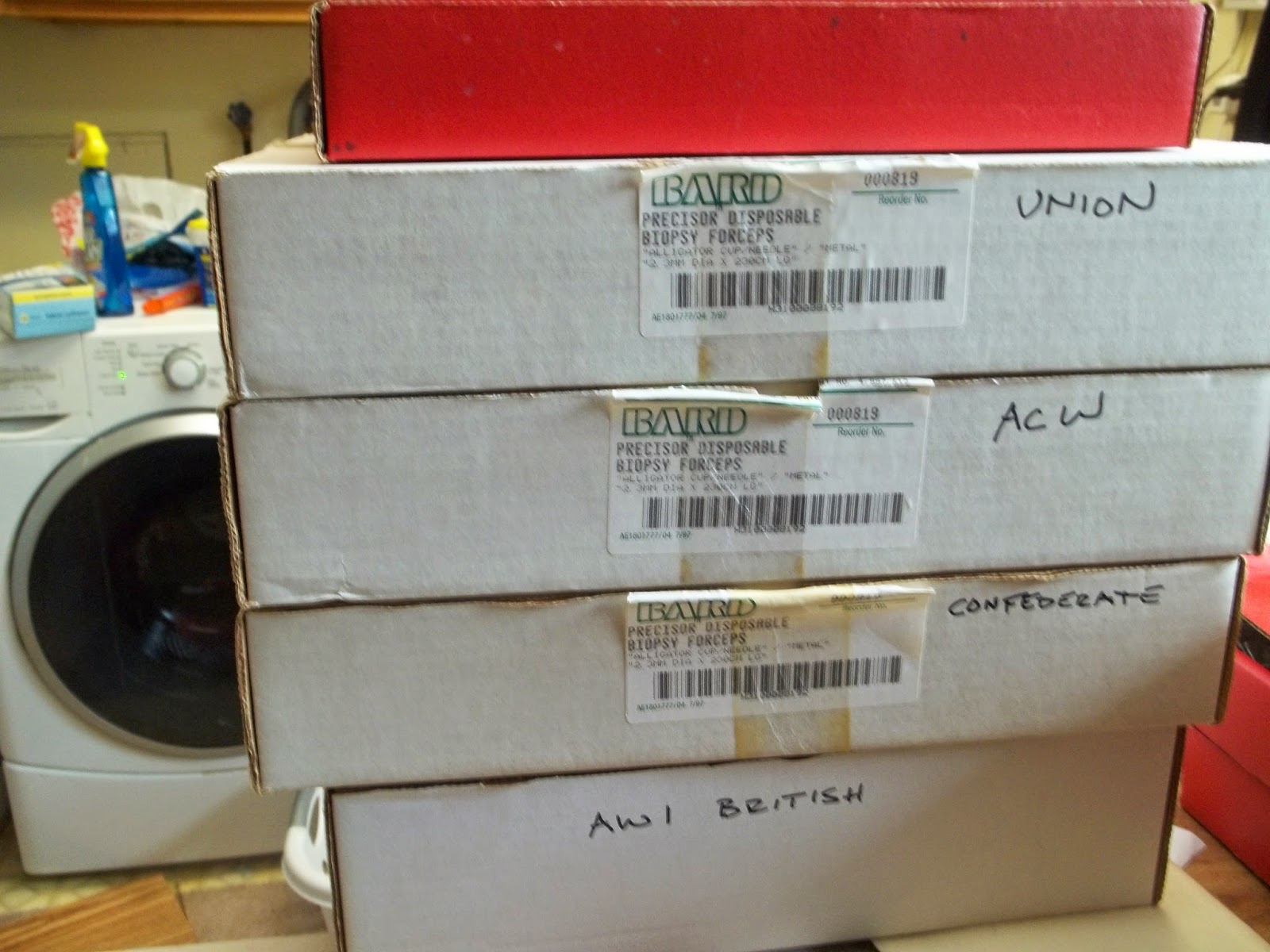 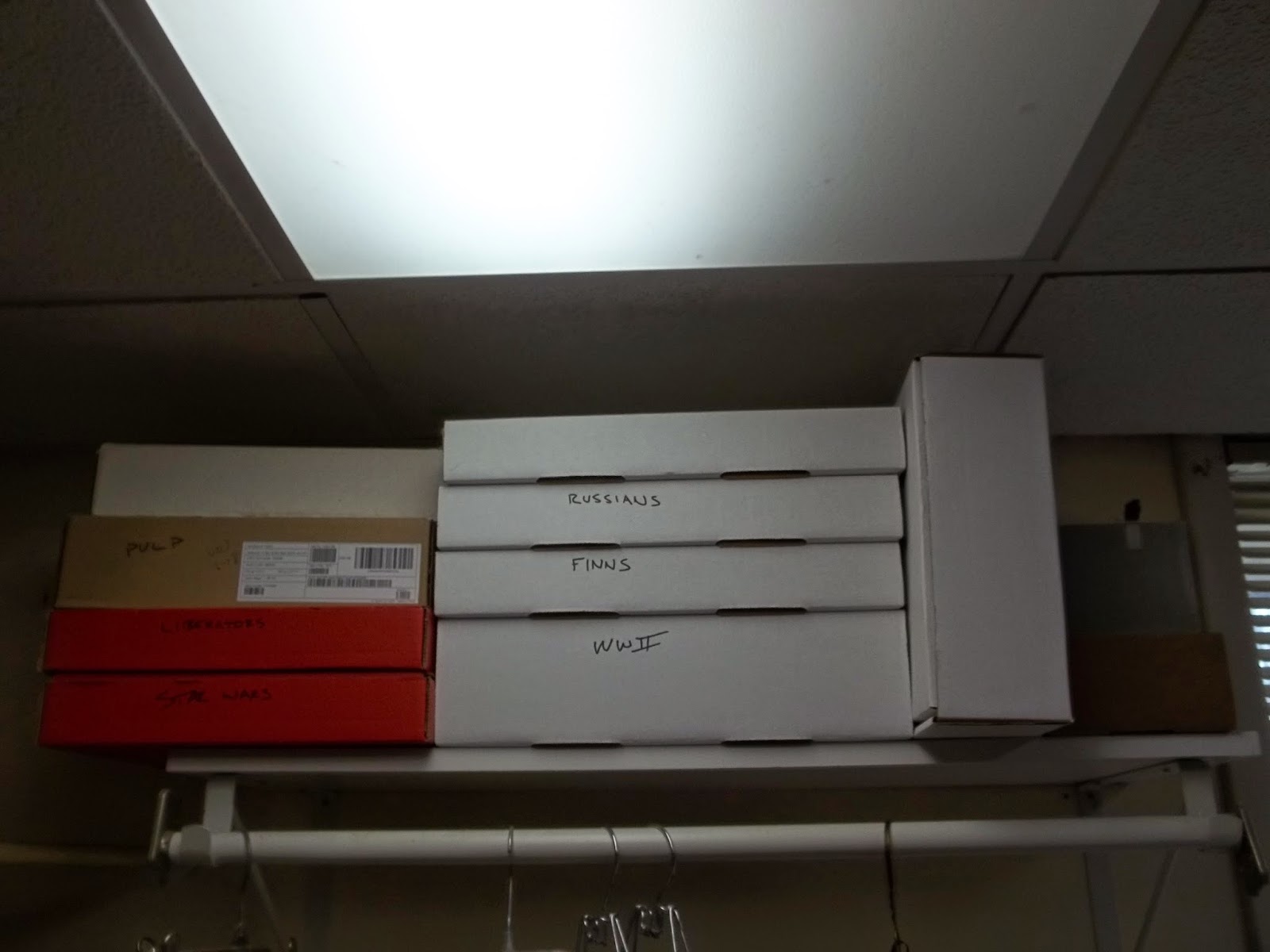 A Trio of Vals for CY6

These had been sitting around on the bench forever, so I just did the final touchups and got them on their way. I haven't had a CY6 game in a while, but really should, I have so much stuff now.

These are painted up slightly differently than previous Vals, with the IJN green finish rather than the grey/white previously. No specific reason, I just wanted to mix it up a bit.

Raiden 1/285 models with mostly Testors paint, with some Vallejo. 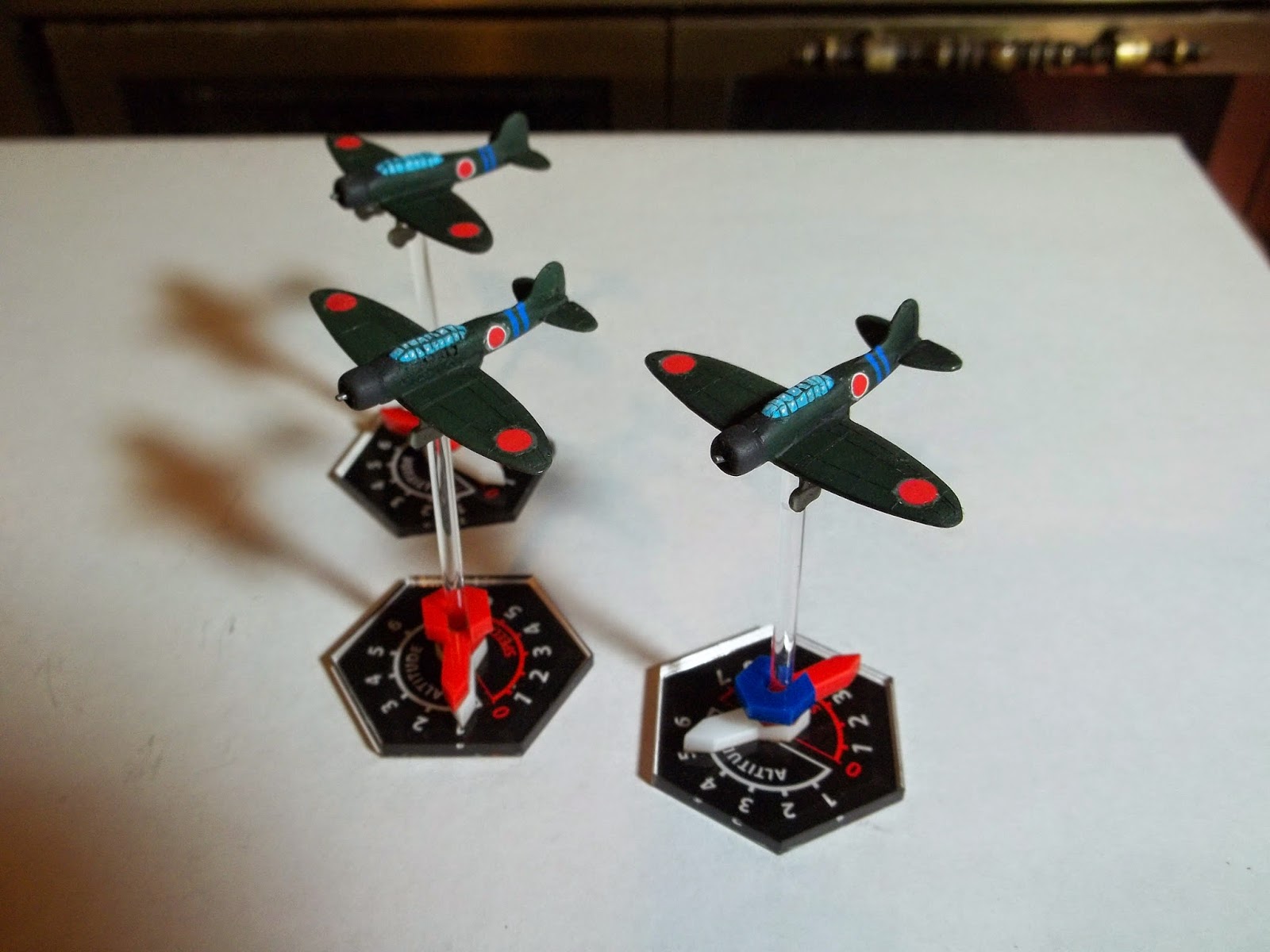 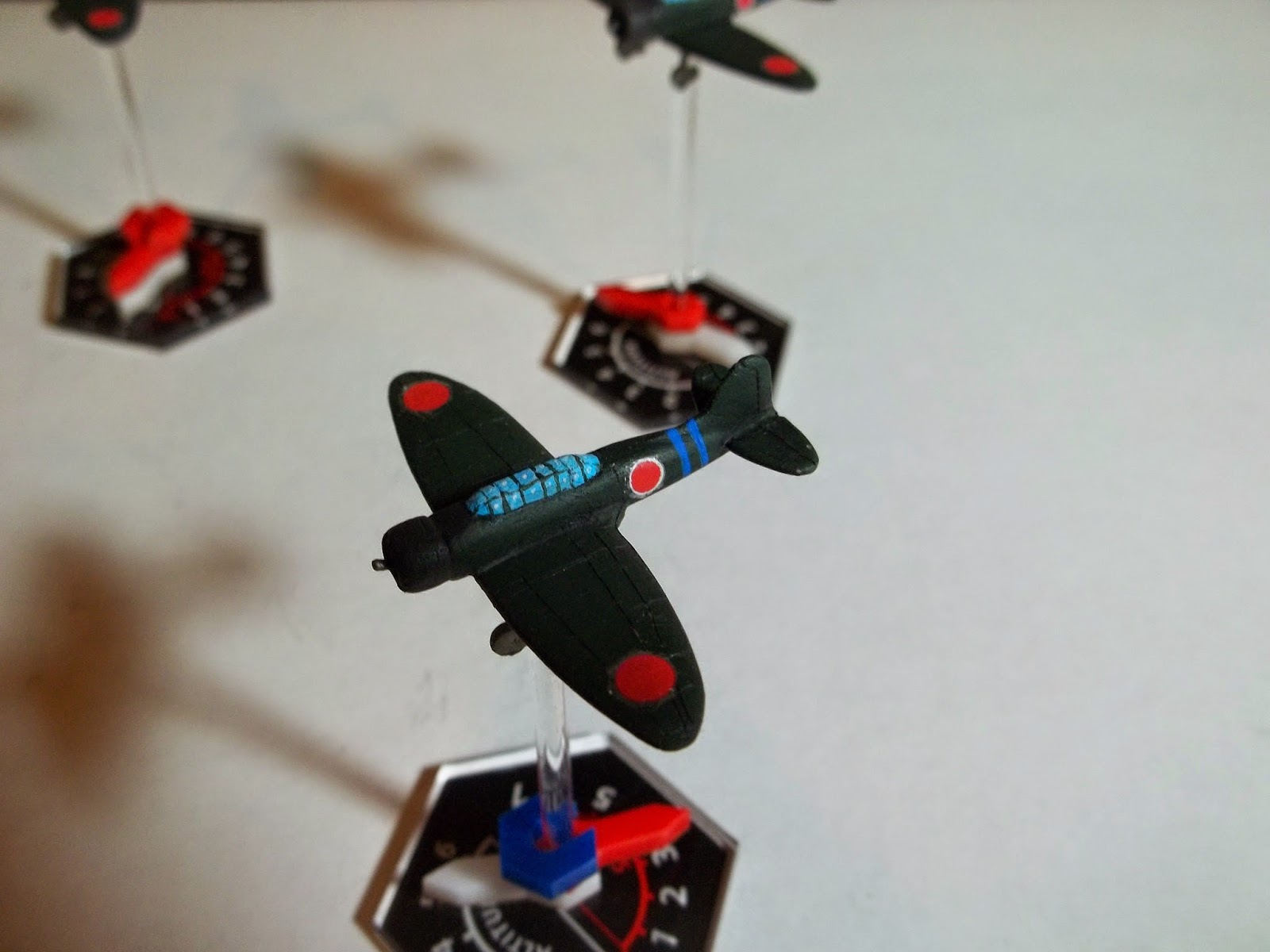 Email ThisBlogThis!Share to TwitterShare to FacebookShare to Pinterest
Labels: CY6

Striped Pants: Not as Bad as Plaid, I Suppose 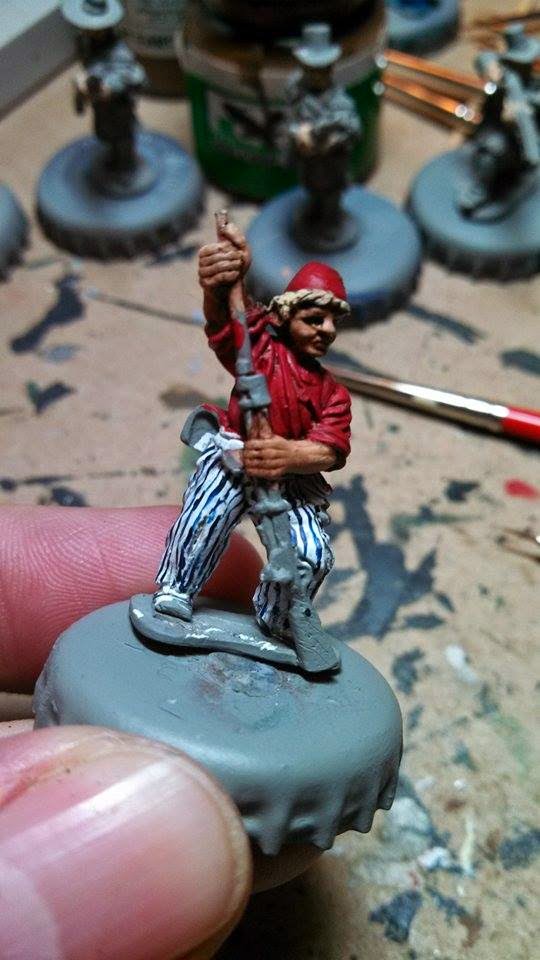 I've always kind of wanted to paint up a Jacobite army. Then I think of the plaid. Oof. But you know what? Pinstripes are just about as bad! Why, oh why, did the Lousiana Zouaves have to wear these? 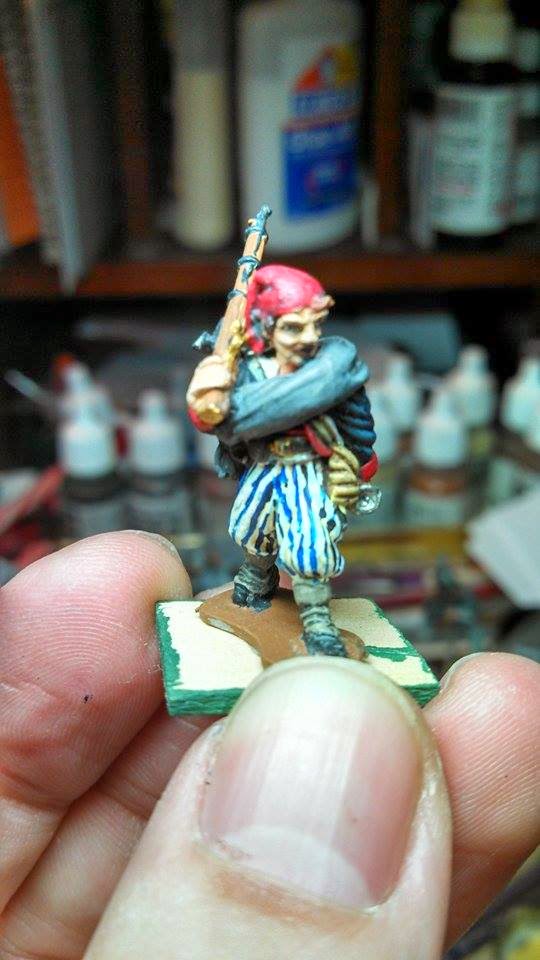 Every good Confederate army has a unit of Wheat's Tigers, right? So I set off to do the same. But these pants really seem to bog me down, and after doing one or two, I'm ready to go paint some Yankees. There we go, sky blue pants, blue coat, done.

At least I can hope that one day these will look nice on the table.

Here is another addition to my growing collection of laser cut MDF buildings, a house suitable for 18th or 19th century North America. This one is from Laser Dream Works. While it lacks the tabs and slots found in 4Ground and other kits, this was still a simple project to put together. It includes a lot of nice little details, like a mantle above the fireplace and the hatch to the cellar - and it even comes with an outhouse!

While not shown here, it also comes with a section of snake rail fence that I found to be quite ingenious. Simple interlocking MDF pieces. I need to get a pic of that.

It painted up nicely using acrylics (no warping), and I really like the way the shingles worked out. These are provided as strips of heavy card, and just need to be layered on. As you can see, it sizes up well with these Dixon ACW figs. 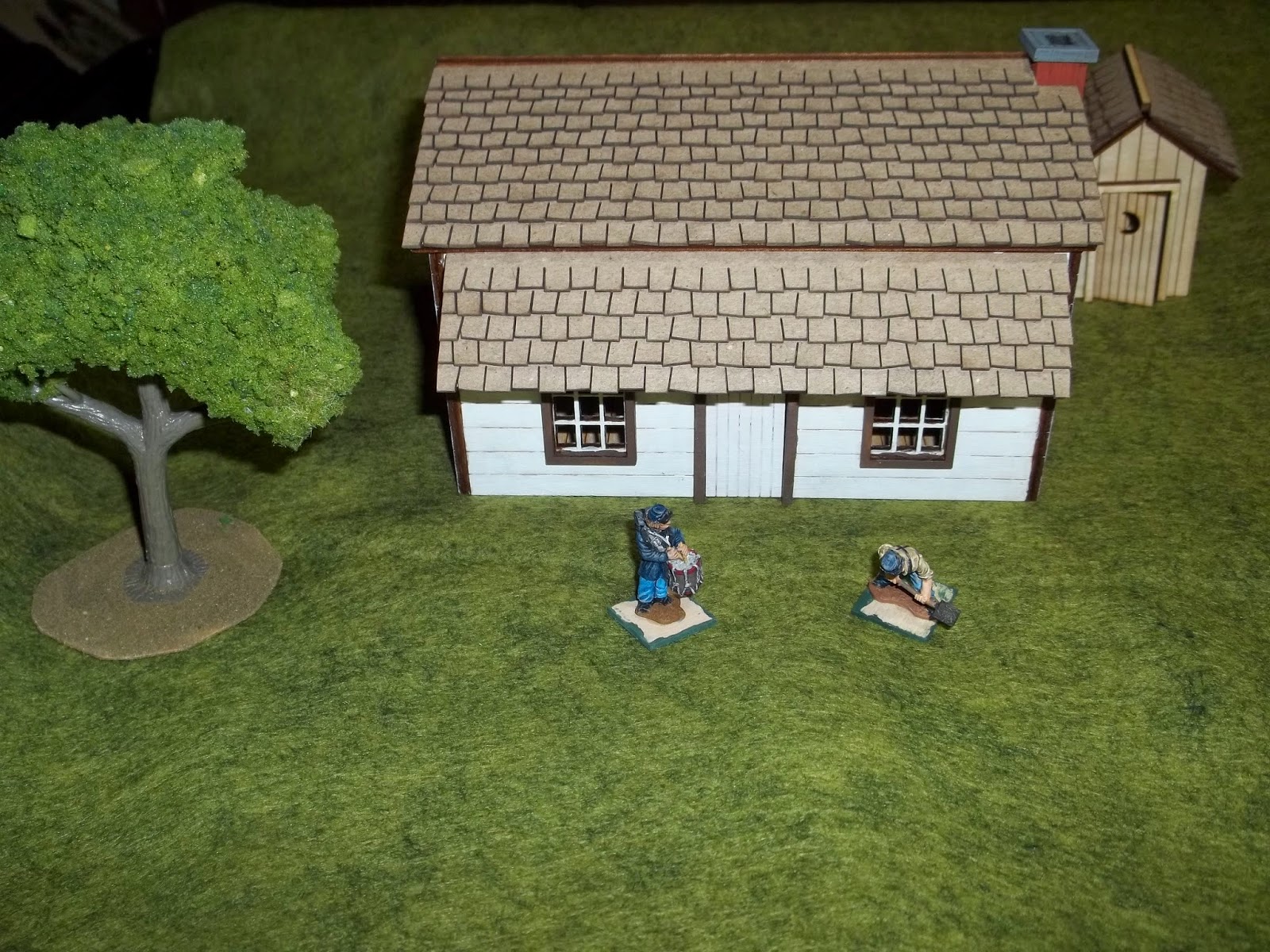 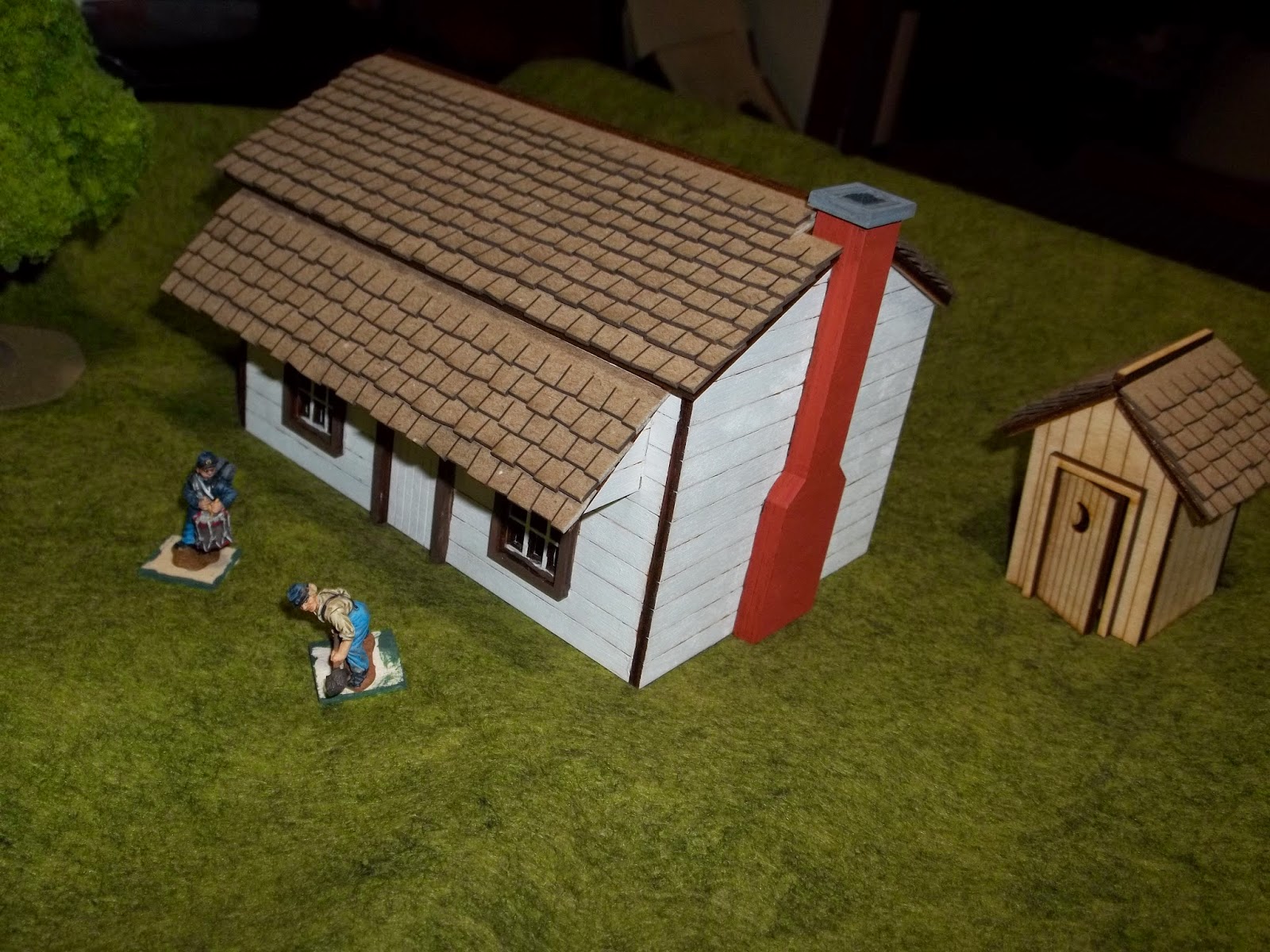 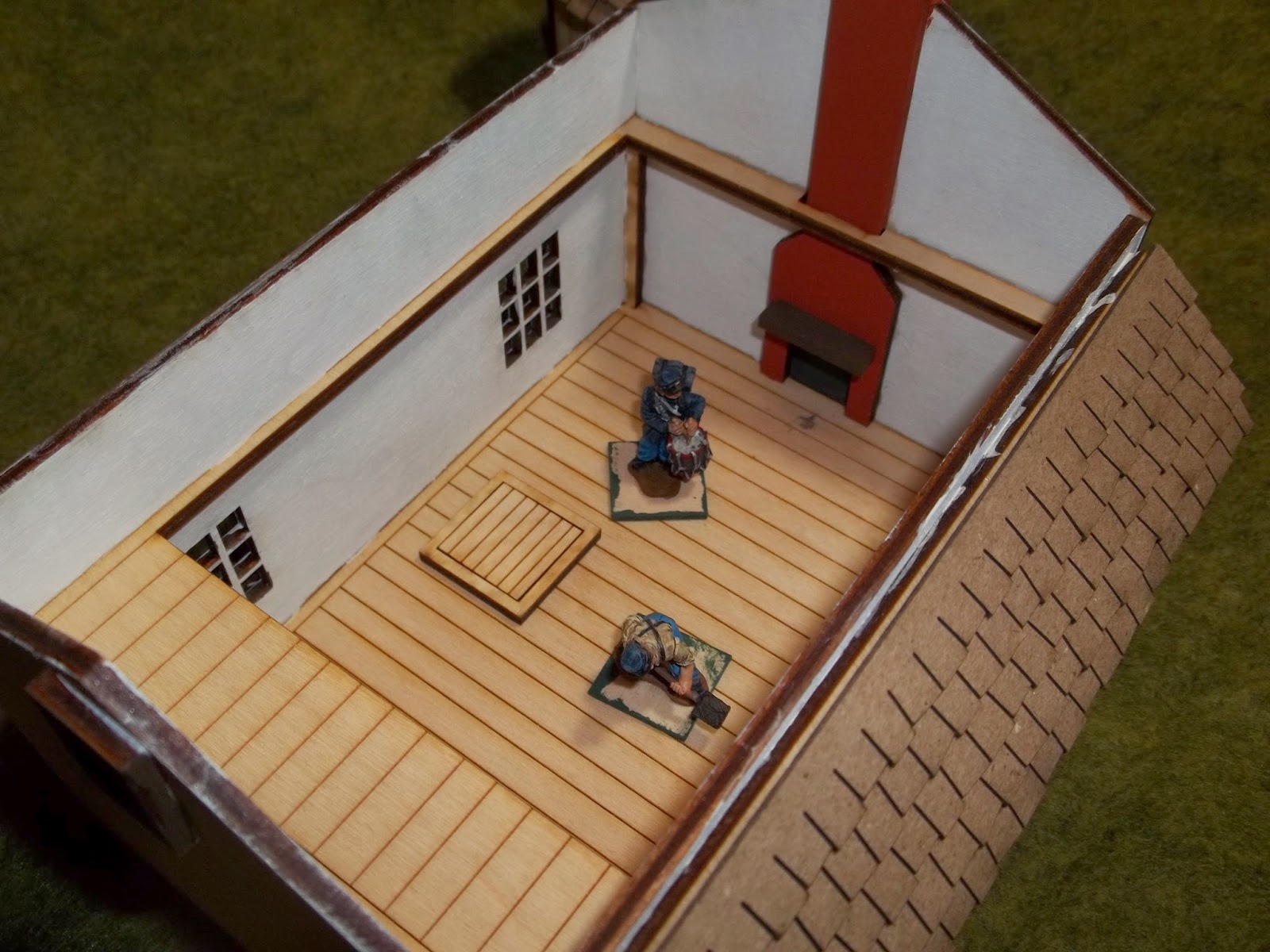 Laser Dream Works' main focus is on ships. Their 28mm Napoleonic ships are a sight to behold. But he has a growing range of buildings, and I look forward to getting some more of his colonial buildings and barn.
Posted by Scott Mac at 9:22 AM No comments: 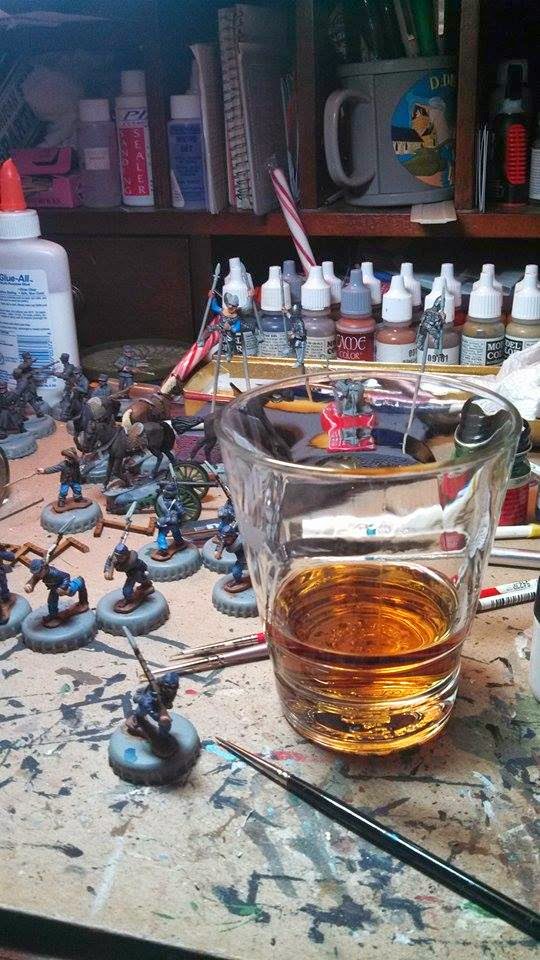 Last night, after swim lessons and playing with the neighbor kids, the girls fell asleep at 7:30. 7:30! My wife was content with a book, and the dog seemed happy with a new bone.

That left me with some, what's that called again? Me time! I usually have to sacrifice a goat or something for the stars to align like that. So out came the 12 year MacAllan and a date with the paint brush.

Those Union troops you see there, I have almost done except for some facial details and some touching up. Then there are those Norman horse you can see. Off to the left off scene are some CY6 aircraft. I also finished up another dark age building for Saga. Hope to get pics soon. I also primed and started the rest of my Louisiana Tiger zouaves and another Union artillery crew.

I still ended up wasting time chatting to friends on the Facebook, but with some good scotch, who cares, right? I wouldn't count on this happening again for a while.

Yes, I did do some painting over the fall and winter. As evidence, I present a portion of my Saxon warband intended for use in Saga. 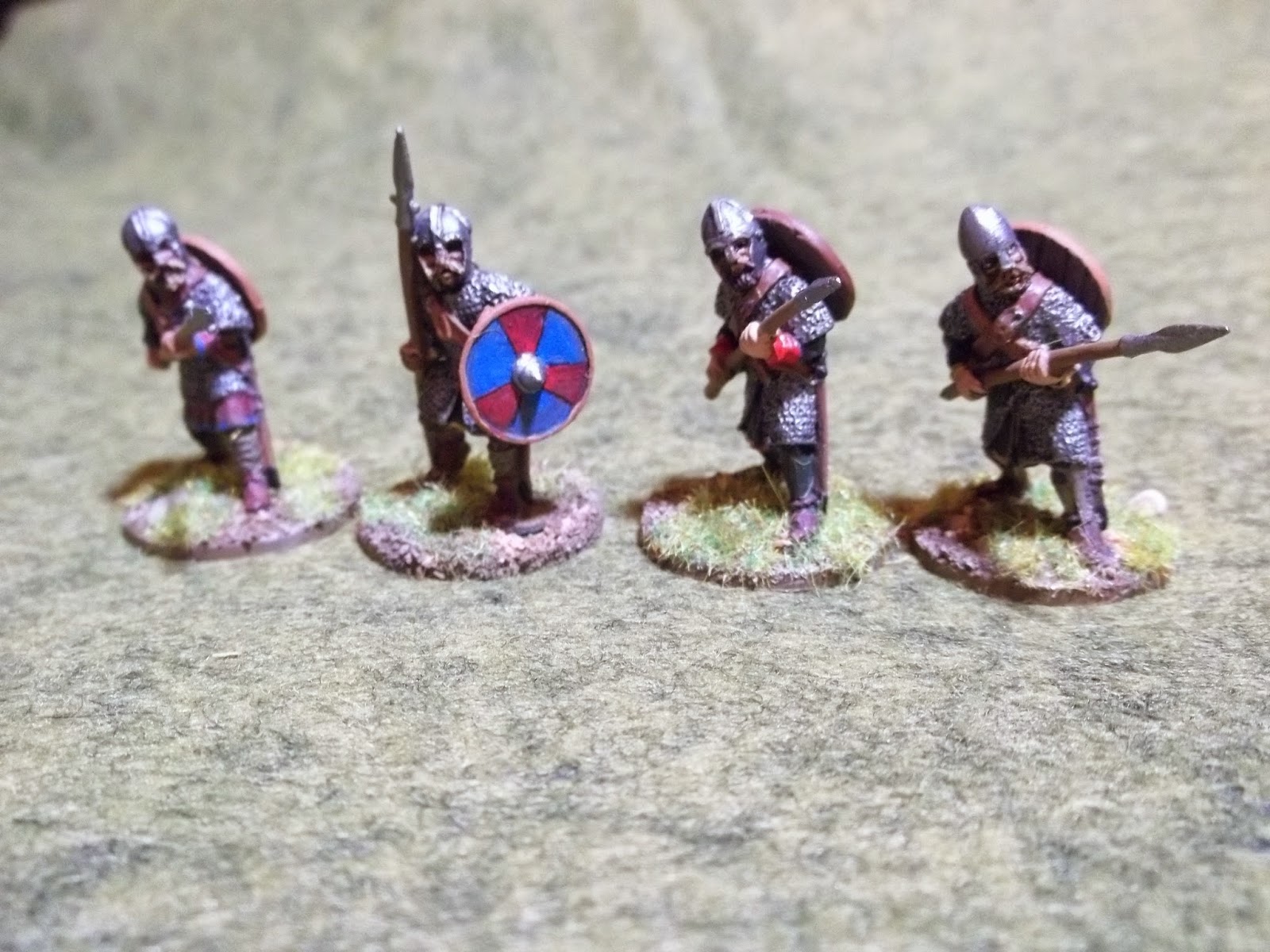 These are Black Tree Design minis, which I find to be quite nice. Clean sculpts, not a lot of extraneous "stuff" and easy to paint. Good poses and facial expressions too. Painted with the usual mix of Vallejo and Testors.

The rest of the warband is made up of some old Gripping Beast and Old Glory minis I painted up years ago. I'm debating rebasing those to match these, but we'll see.

Now, to just get a game going!

Looking again, I really need to get my wife to take some better photos with her good camera. These are pretty bad. 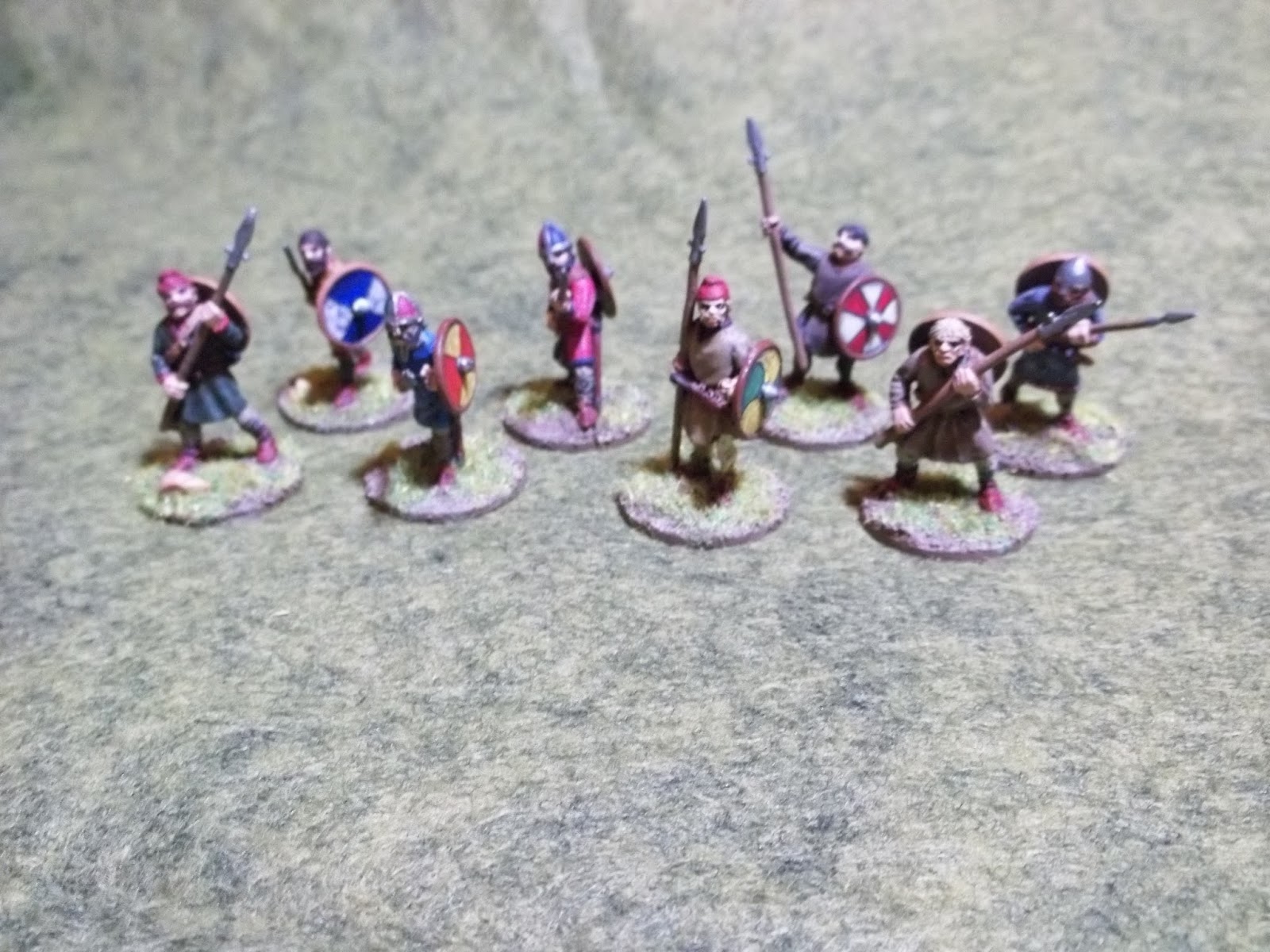 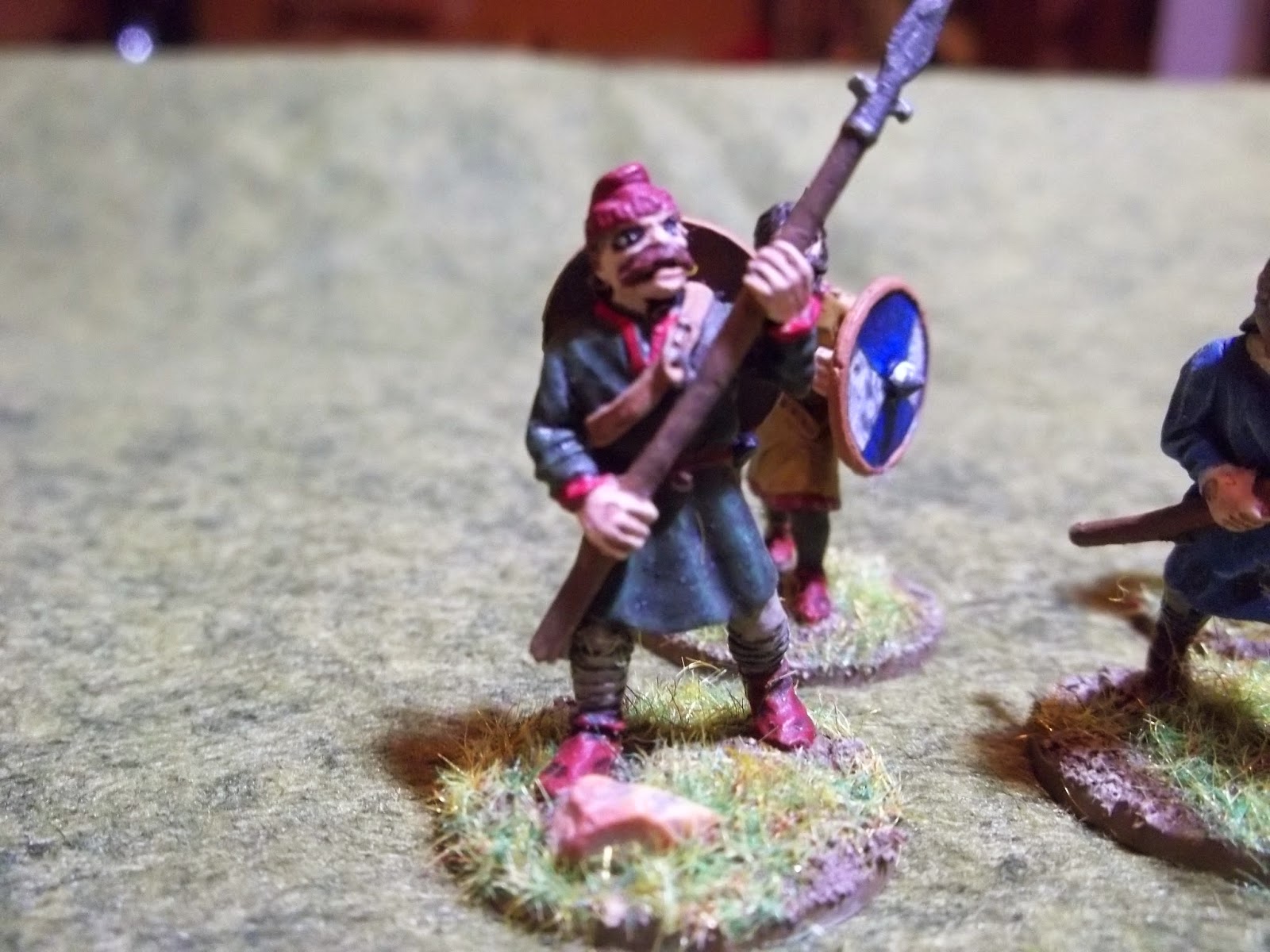