While putting the finishing bits on my Saga forces (Saxons and Vikings - I really need to do the bases and take photos!), I placed an order for more minis. Yes, more. 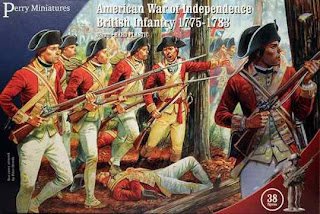 I am making my first foray into plastics and decided to try the Perry AWI British. My erstwhile AWI opponent has done a box of these and says they are great. My main focus has been on the Americans, with some French, and I have just a handful of British. (Hey, that's been HIS side!) But it never hurts to have a small enemy force on hand, I suppose. I also ordered some French artillery, which I have none of.

Plus between Fife and Drum, and the new King's Mountain Miniatures, the AWI seems to be in a golden age at the moment. I should take advantage, and probably order some of those too!

A Project Too Far?

So I started looking at all of the in-progress projects on the bench last night, and quite frankly was horrified. Just on the partially painted miniatures front, I see:

And that doesn't even count the 3 or 4 Indy cars in state of partial assembly, or the slot car project! Or the Hornet project, or .... 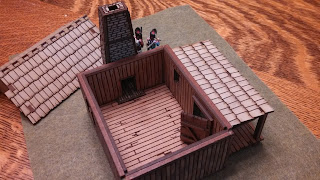 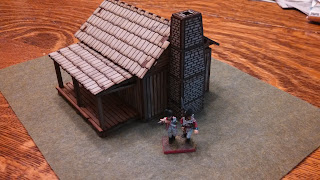 But lest all hope seem lost, I have managed to finish a few projects. Among them is this New France Settler's Cabin from 4Ground. These things are spectacular! I have since ordered a few more 4Ground products, and hope to post some more about them. Easy to assemble, no paint required, enough detail to be interesting but not fiddly. I think the wood material really captures the feel of the FIW period. (Oh, I didn't mention that project yet, did I? Ack!)
Posted by Scott Mac at 4:23 PM 2 comments: