Is it Worth Selling to Exit a Gaming Period?

I’ve had some more success on ebay recently, which is leading me to ponder what else I can get rid of.

Last week I sold four lots of some old Heroes in Action army toys, netting about $130. I know, it shocked me, too. I also sold a copy of Tactica Ancients. It was interesting, but a period I probably just was never going to get into.

This week I put up a bunch of old Micronaut toys. Remember those? Some good bids so far, too. Basically, combined with last week, I’m north of $160, with several days to go. Good thing, too, the hobby budget needed an infusion.

There is a small number of other random gaming bits and pieces if you want to check it out. Seller macsparty2.

Which brings me back to what else can go. I’m actually considering parting with other sets of figures from three other periods where gaming has just not been happening. (Remind me to get some photos.) To wit:

For now, I think I’d like to hang on to my Dark Age stuff. Saga looks intriguing, and you never know. AWI, ACW and WW2 skirmish and CY6 have all been either gamed or added to in the past six months, so those are keepers for sure.

I guess I either need some justification to keep them, or get on to padding the budget for more current interests.

The summer winds seem to have scattered the hobby activities, but all is not lost! Here's a brief sampling of what's been happening of late.

I also sold a bunch of old army toys from my youth on ebay, helping fund the ever-low hobby budget a bit. So that certainly helps!
Posted by Scott Mac at 9:41 AM 1 comment:

Meanwhile, over at Up the Creek Brewing comes this Belgian dubbel. Actually it was brewed up late last fall, but I have been negligent in posting updates in this department! 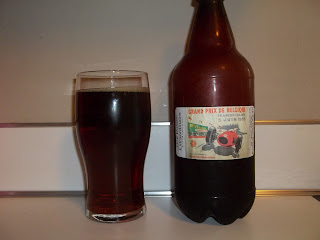 This was one of Mr. Beer’s seasonal all malt brew kits. Basically just mix the can of Belgian Style Dubbel HME with water, boil, add dry ale yeast, and let the little micro-organisms do their thing. Yum!

As you can see, I blended the racing theme into this project by incorporating a vintage Spa Francochamps racing poster image into my label. Hey, it needed a touch of the Belgique somehow.

Honestly, this wasn’t my favorite batch of home brew. It had a bit too much twang to it, though it has mellowed out slightly with age and tastes better now than it did at Christmas time.

My Day in Court

It's kind of a sad day when one of our hobbies leads us to appear before a magistrate, but that's what happened to me yesterday.

For those new to the story, here's the Cliff's Notes version: I took the Mustang to a guy last August to do body repair and paint. He flaked out, apparently, and didn't do the work. He cited health issues. Whatever. In February, his MOM called and said he was being evicted from his shop for failure to pay rent, and I had three days to come get my car and my parts. I did (in a snowstorm), but of course he wasn't there and I did not get my deposit money back. He did no work. None. Zip. Zero. Zilch. 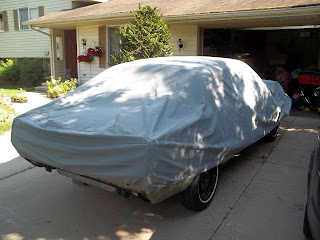 After he wouldn't respond to my calls and emails, I filed in small claims court. That brings us to the yesterday.

I dressed up (put on a tie and everything) and drove over to the courthouse in the next county. Waited around about 25 minutes and got called in. He didn't show up. Shocking, eh?

So basically I won by default, and the judge awarded me an additional $86 in fees and whatnot that he is supposed to pay. She said they would mail him the order, and if I haven't heard back in 21 days, I can turn him over to a collections agency and at least get some of my money.

In the meantime, the car sits, covered, in my driveway. I had another guy come and take a look a couple weeks ago, and it sounded promising, but I haven't heard back from him. We'll see.

This has just gotten far more complicated than it ever should have been.
Posted by Scott Mac at 9:33 AM No comments:

So last week I had to take some work home with me, which fortunately doesn't happen often. But while rifling through my case, I found some old AWI scenarios I wrote some years ago for The British Are Coming! I had started reentering them, with the thought of either compiling them in some sort of booklet, or just making them available online.

I have some CY6 scenarios written up as well, mostly small stuff for Pearl Harbor and the Aleutians. Nothing finalized, really, and they need additional testing.

The question is, how best to do that? How best to host them for download? On the assorted Yahoo sites? I'd like to put them here, somehow, or at least direct link them but I'm a bit technology challenged.

Would anyone be interested in seeing these? The CY6 stuff is probably more immediately ready to go, but I could try to do some AWI in my spare (hah!) time.

Well, I'm still pretty tuckered out. This time of year always seems so busy. The Race. End of year school activities. Gardening. And work always seems to pick up for some reason.

All of which puts a squeeze on pretty much all hobby activities.

So for today, I'd like to simply direct your attention to a few message boards where I've learned a lot about model race cars. There are some extremely talented builders out there, so if you're in the mood for some model race car eye candy, check them out.

Randy Ayers NASCAR modeling forum - anything and everything you ever wanted to know about NASCAR from the earliest days to now, and a tremendously great bunch of guys (and gals)
Posted by Scott Mac at 10:12 AM No comments: