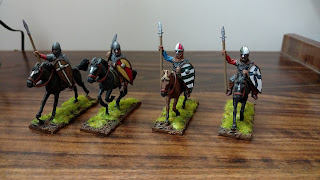 As a Saga player, I suppose it's inevitable one would eventually start thinking about 1066 and all that, with visions of shield walls standing stalwart atop a hill in Sussex, and the sounds of the thundering hooves of mighty Norman horse approaching. Banners are unfurled, battle cries are screamed.... Well, you get the idea.

Of course my Saxon force is the most "complete," with a good six points ready to go at any time. I could probably scrape a few more, maybe eight? Just a few more to paint and I'll call it Anglo-Dane as well. And my Viking force is nothing to scoff at either. At least four points there. Maybe six? I'd like another unit of hearthguards.

But I digress. Today marks the start of something new - the Normans! These have been languishing around a while, but I am happy with how they turned out. They are Black Tree Design figures, with the usual mix of Vallejo and Testors paints.

This is the first Dark Ages cavalry I have done, horses always being somewhat of a challenge. But I think I am getting better at them.

I should probably get some archers. After all, someone needs to shoot at Harold's eye.

This faction will probably never quite get as big as my Saxon/Anglo-Dane, but who knows? 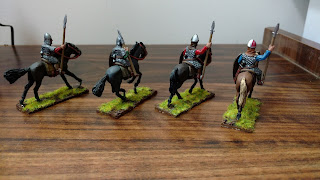