Yeah, geese seem an unlikely subject for a game. But yet Brian Garthwaite has pulled it off in this delightful print-and-play solitaire game, Snowbirds. 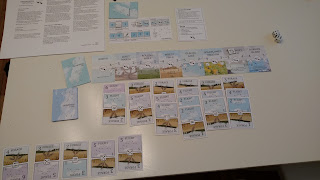 Downloaded from Board Game Geek as part of the 2017 PnP challenge, this is a clever resource management game. The idea is to guide your flock of geese from somewhere in the north along a migratory route to more pleasant winter surrounds somewhere in the south.

It uses a deck of cards to randomly construct a map, so you never know where your next waypoint is until it is time to take off. Each stop has a different flight distance requirement (a number you have to meet or exceed with your available flight cards), a food requirement (forage for food before you go, or the hunger will make the flight seem longer, and you have to expend higher flight cards to make it) and a "risk" factor which basically controls your exhaustion level, which can be somewhat managed with rest cards. But don't use too many - the points add up at the end of the journey! But definitely keep an eye on your hunger and exhaustion levels. Too high, and the result is a dead duck, er, cooked goose, er, you know what I mean. 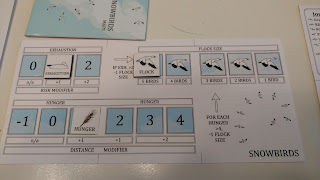 It's really a rather elegant little system, with the randomized plotting allowing for increased replay opportunities. There are more map cards in the set than required for an individual game, adding variety. Plus there are expansion cards available (I haven't printed those yet) to enhance it even more. There is even a two-player system in the expansions. I haven't tried that either.

As for the aesthetics, the artwork is incredible. Very colorful and evocative of the types of environments geese are likely to find on a long journey. 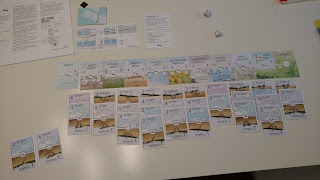 I happen to live near a power plant cooling pond and a cornfield, both of which are great stopping points for geese heading south in the fall or north in the spring. The water never freezes, a bonus for the birds here in frozen Michigan. In fact, as I played the game yesterday, I could here a flock honking as it passed overhead. Nice touch. :)

So far in every game I have played, at least three of my five geese have made it. The game includes a "victory point" schedule, and on that I didn't fare so well. My high score is 3 points! Anything over 10 is a clear-cut "victory." I think the designer noted a theoretical maximum of 22. So it is a challenge, without being impossible, which is a nice balance. 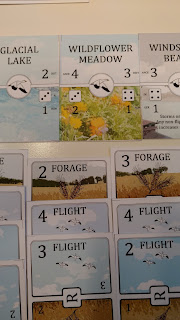 Snowbirds. While it sounds like a game about senior citizens playing shuffleboard in some quiet Florida retirement village, it's definitely more fun than that. After a hard day of leading your Saxons to bloody victory over Vikings, or firing volley after volley into the approach French Imperial Guard, or blasting another Zero out of the sky with your Corsair, this is a nice little change of pace.

Email ThisBlogThis!Share to TwitterShare to FacebookShare to Pinterest
Labels: solitaire