Normans on Foot? Without Armor?!

I really like Saga. A lot. I mean, there is a lot to like about it. A warband creation system that is easy to grasp, right-size units that won't break the bank or the painting queue and, of course, the differentiation between factions using the battleboards. 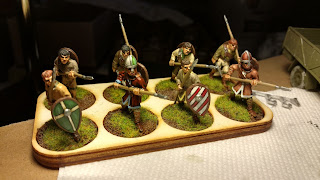 For all that, there are still a few puzzling bits. For example, I've always wondered about the lack of rules addressing attacking uphill. Seems that should get at least a fatigue or something. But that's not the point here. Another puzzling bit has been the total eschewing of Norman foot troops.

Now, don't get me wrong. The sight of a line of Norman knights mounted on their hardy warhorses is surely something to stir the heart and the imagination. It's a great basis for the factional character in the game. But what about the chaps on foot? Those who couldn't afford a horse? Or, perhaps, had to leave it behind in Normandy? Surely the Norman army had a large contingent of good old fashioned poor bloody infantry.

So that's where I'm going with my Norman force. This is my first painted unit of foot troops, some unarmored warriors. They don't count for much on the Norman battleboard, but that's what house rules are for, right? I'm sure I'll think of something. After all, I have quite a few more of these fellows to paint. I also have about three units of dismounted knights awaiting the brush as well.

These particular minis come from Black Tree Design. They were very easy to paint, using the usual mix of Vallejo and Testors. One downside is there are only four poses spread amongst the eight, so there is some repetition. But then again, who's looking at them? Everyone is watching the knights on their mighty steeds!

Watch this space for more Normans!
Posted by Scott Mac at 11:42 AM