We Tried, But It's Time

Sorry, I know I have only just come back to the blog, but already I need to take a side track. Today we had to say goodbye to our faithful little beagle, Abby. Or, Abby Dog, as the girls called her.

Knowing it was the right thing to do doesn't make it easier.

We adopted her from a shelter - Last Chance Rescue (sounds ominous, no?) - in May 2006. They told us she was three, but we suspect she was older. The vet estimated she is more like 13, maybe even 14. 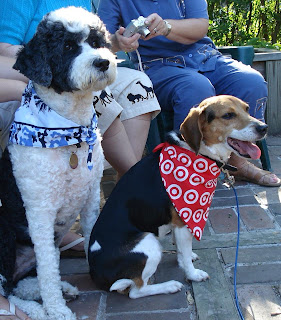 She always was a quiet, timid dog. Never barked, unusual for a beagle. She was jumpy and would get scared a lot, but would also cozy up to us on the couch. She felt safe with us, I guess. We tried our best to give her a happier life and bring her out of her shell. She never played, but did love going for walks - and chasing rabbits. Darndest thing, for as odd as she was, when she would get on trail, it was like she was a real dog.

She hadn't been good for a long time, and had a history of urinary infections. She made a lot of messes, and was confined to quarters a lot. But she still seemed happy to get up and go out in the morning. We knew the end was coming, but I wanted a clear sign she was ready. Saturday, we got it. I went to let her out, and she had made a holy mess, and could hardly get up. Then she could hardly walk, and wouldn't eat. She sort of stumbled around all weekend and stared aimlessly. There was nothing there.

Sunday, she did get a small spark and broke into a bag of treats left on the floor, and ate the while bag. We didn't care. Then Sunday night the girls wanted her to sleep in their room, so we let her.

Then I made the call first thing Monday morning.

If you couldn't tell, that's Abby on the right, with her "cousin" Indy. OK, technically it's Independence since she was born on July 4, but since my sister is also a race fan, Indy works. Abby is wearing her Target Ganassi Racing scarf I bought her at the Speedway. :)

She wasn't very smart, and could be a pain, but she was our dumb, defective beagle, and we will miss her.